I read Star Child a while ago now but due to personal circumstances I had to pull out of the blog tour in September, which was organised by Rachel’s Random Resources. At last, I am finally getting back on top of my reviews & that includes this one!

I was sent this book to review as part of a blog tour organised by Rachel’s Random Resources.

END_OF_DOCUMENT_TOKEN_TO_BE_REPLACED

Empire’s Daughter is a well-developed feminist, v queer fantasy that I just loved! I love how unique the world-building is & that there was more than just one plot to the story. I love the message this story sends out & adored the writing.

I was sent this book to review as part of a blog tour organised by Rachel’s Random Resources.

END_OF_DOCUMENT_TOKEN_TO_BE_REPLACED

In the city of Craewick, memories reign. The power-obsessed ruler of the city, Madame, has cultivated a society in which memories are currency, citizens are divided by ability, and Gifted individuals can take memories from others through touch as they please.Seventeen-year-old Etta Lark is desperate to live outside of the corrupt culture, but grapples with the guilt of an accident that has left her mother bedridden in the city’s asylum. When Madame threatens to put her mother up for auction, a Craewick practice in which a “criminal’s” memories are sold to the highest bidder before being killed, Etta will do whatever it takes to save her. Even if it means rejoining the Shadows, the rebel group she swore off in the wake of the accident years earlier.To prove her allegiance to the Shadows and rescue her mother, Etta must steal a memorized map of the Maze, a formidable prison created by the bloodthirsty ruler of a neighboring Realm. So she sets out on a journey in which she faces startling attacks, unexpected romance, and, above all, her own past in order to set things right in her world.

END_OF_DOCUMENT_TOKEN_TO_BE_REPLACED 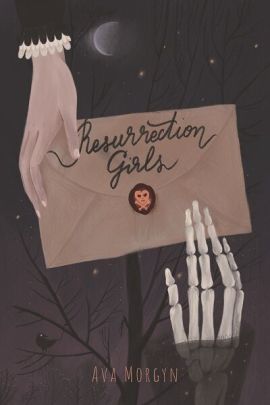 Olivia Foster hasn’t felt alive since her little brother drowned in the backyard pool three years ago. Then Kara Hallas moves in across the street with her mother and grandmother, and Olivia is immediately drawn to these three generations of women. Kara is particularly intoxicating, so much so that Olivia not only comes to accept Kara’s morbid habit of writing to men on death row, she helps her do it. They sign their letters as the Resurrection Girls.

But as Kara’s friendship pulls Olivia out of the dark fog she’s been living in, Olivia realizes that a different kind of darkness taints the otherwise lively Hallas women—an impulse that is strange, magical, and possibly deadly.

END_OF_DOCUMENT_TOKEN_TO_BE_REPLACED

Hell is divided into seven regions. The first region is designated for the purest of souls, the seventh is for the evilest. There was once a king of Hell, but the steward family has ruled for centuries. Nora, the stepdaughter of the steward is undone when her mother and step-father take away her beloved tutor, Peter. When Nora confronts the steward and her mother, the discussion is heated and ends with the steward in inexplicable pain.Shortly after, Nora finds herself in the Starry Wood. Peter told her of the perils within the forest, and it’s not long before the inhabitants of the wood find her. A giant hunter named Aegis comes to Nora’s aid. He is drawn to Nora, compelled to protect her from the steward’s assassins, the giants, and the evil souls who escape the seventh region. Together, they travel the seven layers of Hell to discover why the steward is so threatened by a teenage girl.

END_OF_DOCUMENT_TOKEN_TO_BE_REPLACED

Gothel is a witch. Punished for the actions of her mother, her choice is simple: either she stands guard over Princess Rapunzel—or she dies. But just because a choice is easy doesn’t mean it’s pleasant. Protecting Rapunzel means watching as the princess lays trapped in a tower, bedridden by hair that is so long and heavy it’s slowly driving her insane. Gothel’s life has become one of imprisonment and solitude as well—until a prince and his handsome squire appear at the tower.

Only one object can cut Rapunzel’s hair and end the curse: a pair of magical shears. But the shears are guarded by the most terrifying witches in the land, who also happen to be Gothel’s aunts. As Gothel and the prince’s squire, Raj Talmund, work to form a plan, she finds herself more and more drawn to the mysterious young man from the Outerlands. Unfortunately, his destiny is far more dangerous than she wants to admit: to save a princess, he must kill the witch who’s been forced to guard her.THE WITCH’S TOWER is the first in an inspired new series of fairy-tale retellings from award-winning fantasy author Tamara Grantham.

END_OF_DOCUMENT_TOKEN_TO_BE_REPLACED

When technology fulfils every dream, reality is a nightmare.

Below the streets of New State, the Grounders fight to remain free of the technological control of the world above. When dusk falls, Wren risks her life by entering the capital city as a raider to secure resources for the rebellion. Each step further inside puts her life in jeopardy from New State’s deadliest weapons – Phantoms. More machine than human, tortured until devoid of emotion and caring, Phantoms have only one objective. Kill. And they do it with exacting precision.

Wren is good at her job as a raider and committed to the cause until she meets Codex, a New State citizen who doesn’t quite fit her preconceived expectations. After a couple of awkward encounters, he shows her the meaning of hooking up—a computer simulation that allows people to live out their fantasies—without the complication of emotional entanglements or physical reality. But what Wren feels for Codex is very real. And it’s punishable by death.

As she and Codex grow closer, Wren convinces him to leave New State for the underground. But unrest between New State and the Grounders escalates, and Phantoms move in to destroy her world. Nothing goes as Wren planned. Families are arrested, loyalties are strained, and Wren’s forced to choose between her people and her feelings. The wrong choice could mean the end of her people, and reality could slip away—forever…

END_OF_DOCUMENT_TOKEN_TO_BE_REPLACED

So today I have my second ever author guest post & it’s all about Visions of Zarua by Suzanne Rogerson; in her post Suzanne talks about why she loves her character Jago & his story. I’m obsessed with the cover of this book & the story sounds fab (it also has really high ratings on GoodReads)!

END_OF_DOCUMENT_TOKEN_TO_BE_REPLACED

Due to having to go to training for work on the weekends I had to email Rachel, the organiser for this tour, & tell her that I wouldn’t be able to review Strand of Faith… however, with a little bit of hard work & perseverance I did actually manage to finish this book the day before my review was due to go up – so yay me! I’m super glad I did manage to fit this book in because I enjoyed it’s characters & have been left intrigued about the rest of the series.

I was sent this book in return for an honest review as part of a blog tour organised by Rachel’s Random Resources.

END_OF_DOCUMENT_TOKEN_TO_BE_REPLACED

The synopsis of this book totally sucked me in so I knew I just had to read it… thankfully the story was just as captivating! Full of magic, love & illusions, this book is incredibly entertaining & will leaves readers numb by the end.

I was sent this book in return for an honest review as part of a YA Bound Book Tours blog tour.

This book contains one scene that involves homophobic violence.