This post is not a book review or a nail art post, or anything like I normally write; it’s something that I am writing without planning and from my heart, after watching last night’s two episodes of Coronation Street, in which the murder of Sophie Lancaster, and the brutal attack on Rob Maltby, was recreated with characters Nina Lucas and Seb Franklin. I am ‘glad’ (if that’s the right word) that the country is being reminded of Sophie and Rob’s story; but I am also angry and devastated that 14 years later, a show as big as Coronation Street feel that there is need of a reminder. We should not need reminding that hate crime is completely inexcusable and that the events of August 11th 2007 should never, ever have happened. We should not need reminding, especially right now, of the damage hate crime can cause.

Photographs of myself at the start and end of my teens.

As a teenager I was an ’emo’. I use that label in a light-hearted, almost proud way now, but when I was a teenager it was often used as an insult, linked with hatred and judgement from those who viewed myself and my friends as too different from themselves. I will probably always be a little bit ‘alternative’, regardless of my clothes or how much eyeliner I wear; just as Sophie Lancaster’s horrific murder will always sit heavily in the back of my mind. The attack on Sophie and Rob will never make any sense to me, not just because I cannot comprehend why it happened, but also because I do not understand how a person could harm another in such a vicious, cold-hearted way. 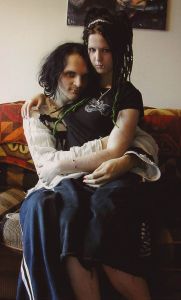 For those who don’t know, or who have forgotten, Sophie and her boyfriend Rob were beaten, in one case to death and in the other nearly to death, just because of their appearance. Just because of their ‘goth’ label. Sophie and Rob did nothing to warrant such an attack – if there could even be a reason for something so vicious and heartless – and yet their lives, and those of their loved ones, were irreversibly changed forever because of a group of evil, mindless thugs. I’m not going to tell Sophie’s story in this post, that has been done by others much more articulate than I, but I also felt that I could not see so much talk on social media and not say my bit.

What happened to Sophie and Rob was wrong, so wrong that there aren’t words to describe it, and the way Coronation Street have handled their storyline with Nina (Molly Gallagher) and Seb (Harry Visinoni) has been brilliant, but completely heart-breaking, and I desperately hope that the memory of Sophie, and the trauma that Rob experienced, is not lost to the viewers amongst all the typical ‘soap drama’ in the coming weeks and months. There is always a mixed response when a hard-hitting subject such as this is covered in a TV show like Corrie, but I am one of those people who will always feel that the upsetting storylines are sometimes the most important ones; that the truth beneath the scripts and sets, needs to be told.

The Sophie Lancaster Foundation, a charity which was set up by Sophie’s loved ones, fights against hate crime; they have worked with Coronation Street on the on-going screen story and work hard to educate the public, and support survivors (they also have merchandise!). You can visit their website here and read the book Weirdo. Mosher. Freak. (if only it had stopped at name calling) by Catherine Smyth, a reporter who was close to the story from the very beginning, which covers the events in 2007, and onwards, in greater detail. There is also a docu-drama by the BBC called Murdered for Being Different and a Youtube series which covers Sophie’s murder, her “Make A Noise” funeral and the subsequent criminal trial. If you do not know Sophie and Rob’s story, please take the time to change that.

Nina and Seb, and their on-screen loved ones, may not be real, but the trauma and heartache that’s at the root of the story is very much real – as is the hatred and violence. I hope that one day hate crime, and the violence that comes with it, ceases to exist.