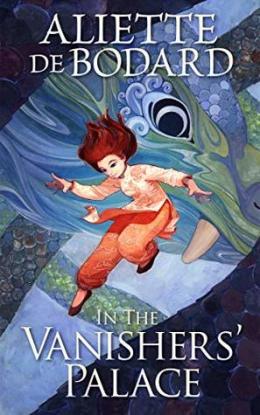 In The Vanisher’s Palace took me a little by surprise because the cover misled me into thinking this was a middlegrade story – it is not a middlegrade story!! Nevertheless, I did rather enjoy this strange little novella & I when I finished it I was incredibly disappointed that it had not been longer; I’ve not read any of Aliette’s other work but I think I may have to now, just to get some more weirdness on my shelves.

In a ruined, devastated world, where the earth is poisoned and beings of nightmares roam the land…

A woman, betrayed, terrified, sold into indenture to pay her village’s debts and struggling to survive in a spirit world.

A dragon, among the last of her kind, cold and aloof but desperately trying to make a difference.

As I said up top, I went into this book thinking it was a middlegrade story because of the cover; that is kinda’ my own fault because if I had read the (full) synopsis properly (what I’ve included is only a small part of it) then I probably would have worked out that it isn’t MG. That’s what you get for judgin’ by a cover I guess! However, I do think the cover is really misleading so I don’t think it’s totally my fault. But! Regardless of this, I did really enjoy Into the Vanisher’s Palace & it ended up being a four star read for me.

Right at the start of the story, it did feel like I was missing background information – like I should know more about the world-building – & one of the reasons I wanted it to be longer is because I wish everything had had more of a build up to it & that the author had taken the time to really “set the scene”. But, even without all the details I wanted, I felt fascinated by the world almost immediately & I wanted to know more about the history of the place. The whole story was incredibly “more-ish”, with a very unpredictable plot & a very unique basis for the story. The story is also slammed full of Vietnamese mythology which was so incredibly interesting (another reason I wish it had been longer) & I really enjoyed how much culture there was woven into these 200-odd pages.

This novella is a romance (f/f Beauty & the Beast retelling), but for me it was way more than that; the descriptive passages about The Vanisher’s Palace, & about Yên’s experiences of being there, were written so well that I felt like I was there with her. When the walls tilted & the floors rolled, I felt the uneasiness alongside Yên, & I genuinely ended up feeling a little nauseous because of how well it was all described. Yu Côn, this mysterious dragon creature who is constantly morphing between her human figure & her dragon state, was just the right amount of mysterious & alluring, & I was in awe of her just as much as Yên was – I just would have loved to know more about her species, background & history. The two young dragons that Yên is charged with educating were wonderful characters as well & I felt Yên’s adoration for them tenfold. Aliette’s writing was so good at making me feel whatever Yên was feeling & as I read most of this book in one sitting, I became completely wrapped up in the story.

This is honestly such an intoxicating & bewitching tale that I could have become completely obsessed with, had it been longer – I could totally see this story being an incredibly popular adult high-fantasy & I’m actually so disappointed that it’s only around 200 pages long. Be that as it may, this is a really great quick read & if you love

dragons & warping fantasy worlds then I absolutely recommend you get yourself a copy:
Amazon.co.uk | Amazon.com | Barnes & Noble | Book Depository | Kobo