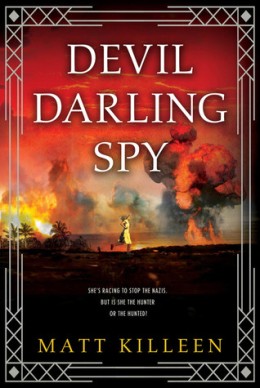 I absolutely loved Orphan Monster Spy so I was incredibly excited about Devil Darling Spy & after a quick recap from Matt Killeen (thank you Matt!) I was so ready to dive into this book but, oh damn, it was so much darker than book one!! I did learn a lot from this read though & I still love the series a hell of a lot; bring on book three!!

Still hiding in plain sight as “Ursula Haller,” the Shirley Temple of Nazi high society, Sarah Goldstein gathers information for Captain Floyd at parties, and when he learns of a German doctor who went rogue in West Africa, she wants to help him hunt the doctor down. Rumours say the doctor has discovered a tool of germ warfare known as “the Bleeding” that could wipe out whole nations. The journey begins as a thrilling adventure for Sarah but as they get closer to the doctor, and see more effects of “the Bleeding” in the communities they pass through, their trip turns from caper to nightmare. A biracial German/Senegalese girl who travels with them, a black French priest with a foul mouth, and the doctor’s glamorous daughter round out the cast of this unbearably high-stakes thriller that pushes Sarah to face the worst humanity is capable of–and challenges her to find reasons to keep fighting.

Devil Darling Spy is without doubt an incredibly dark book & I was actually really surprised by how violent the book was compared to book one, because, to me, it felt like Matt had really upped the ante; there was a lot of cruel behaviour toward prisoners including slavery & testing medicines & poisons, & loads of other harrowing things that absolutely broke my heart. Sarah is exposed to the true danger & sickening events that occurred during World War Two & I wanted to hold her hand through it all. It was definitely a tough read.

From the get-go I was immediately drawn back into Sarah’s story & mission; I’m still totally obsessed with the concept of the series & I love that Sarah continues to feel things throughout her experiences despite her thinking that she should be numb & ‘strong’ – a lot of girls in YA are supposed to be hard & emotionless, & Sarah does have to be like that at times, but we constantly get to see her vulnerable side too & I really appreciated that. Sarah is definitely an interesting character, but Matt also shows us a lot more of who the Captain is in this story, & I really enjoyed all of the little details because he was just sooo mysterious in Orphan Monster Spy.

Something that stuck out to me throughout the read was my ignorance about what was true about World War Two in this book, & what Matt had changed or added; I felt so much anger towards the British education system when reading this book because we don’t get taught nearly enough about World War Two, or One, & history is so important. There are a lot of books out there about the front line or the Holocaust, but this is one of a few books I’ve read set elsewhere that covers other atrocities of World War Two & it’s cool that Matt has covered something less spoken about. Despite hating that I didn’t know exactly what was fact & what was fiction, there is a lot of information in the author’s note & I had a quick chat with Matt about some of the events in the book on Twitter so I now know that the events were inspired by real bioweapons research & war crimes, although Matt did change the countries/settings of some of the horrible things included in the book. Matt has included some real horrors in Devil Darling Spy & it makes me wonder what will be covered in the next book (if there is one), & if it will follow the pattern of being darker than the book before it.

The ending of Devil Darling Spy was super full on & when I finally got through it I felt completely exhausted! There were some bits about the ending that I wasn’t completely sold on but it was ridiculously gripping & it was impossible to put the book down (yet another addictive book that ruined my sleep pattern). In this book, Sarah is forced to grow up (even more than in book one) & she has to take on a lot of responsibility; her development was written really well & it felt as natural as it could be considering the circumstances. All of her changing behaviour & actions were so believable & there’s moments in the book where you forget that Sarah is a fictional character.

NOTE: A lot of the book is set in Africa & there are a lot of Black characters featured so I wanted to read/include a review by a Black reviewer to see how they felt about the story & how the Black characters were written. Unfortunately, I’ve had no luck finding one so far so if anyone knows of one please drop me the link!

Please do grab a copy of this book if you loved Orphan Monster Spy – I promise you that it’s just as interesting & gripping as book one!
Amazon.co.uk | Amazon.com | Book Depository | Hive | Waterstones

One thought on “Devil Darling Spy by Matt Killeen”