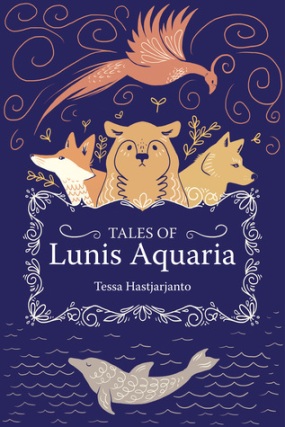 This review shall be short & sweet as this book is a compilation of short stories all written by Tessa Hastjarjanto; I really enjoyed the magic of these stories & I really hope there’s another volume released soon. Tessa’s writing is calming & warm, & I can’t wait to read more of her work.

The balance is tipping. Something shifts in the world of Lunis Aquaria. Menacing creatures, daunting deserts, and treacherous mountains. Hardships and solace, friendships and love. Read the stories of what went on before the world is lost in disparity and meet the heroes who will one day restore harmony.

From the get-go Tessa’s writing had a brilliant fairy-tale vibe to it; the stories were relaxing & really easy to process so they were brilliant to read between bigger, chunky books. As well as creating a relaxing environment for the reader, Tessa’s writing was also engaging & each story was both it’s own tale, & easy to relate to the bigger picture of Lunis Aquaria.

There were several stories that I really liked – I loved anything that included The Lady & it’s her I would like more stories about. The Lady’s stories were based around creation of Earth & give an alternative way of looking at how our world is the way it is. The Lady’s animal pals, who are shown on the cover, were also really interesting & I think their jobs were a really clever creation. The only thing that I wasn’t too happy about was that wolves were hunted in one story, but that’s just me (there is more hunting featured as well)!

continue on from the end of the stories in this book, as I can’t get some of the characters out of my head! Grab yourself a copy now:
Amazon.co.uk | Amazon.com | Book Depository

One thought on “Tales of Lunis Aquaria by Tessa Hastjarjanto”