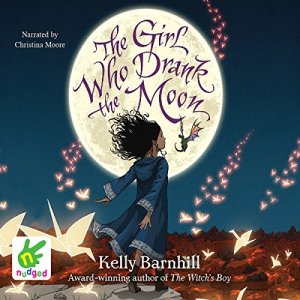 The Girl Who Drank the Moon is a long, slow-burning middlegrade story that I both really enjoyed & was kinda’ over by the end as it was just a little bit too long. Nevertheless, the world-building was intriguing & Aunty Xan is probably my favourite literally elderly person ever.

Every year, the people of the Protectorate leave a baby as an offering to the witch who lives in the forest. They hope this sacrifice will keep her from terrorizing their town. But the witch in the forest, Xan, is kind and gentle. She shares her home with a wise Swamp Monster named Glerk and a Perfectly Tiny Dragon, Fyrian. Xan rescues the abandoned children and deliver them to welcoming families on the other side of the forest, nourishing the babies with starlight on the journey.

One year, Xan accidentally feeds a baby moonlight instead of starlight, filling the ordinary child with extraordinary magic. Xan decides she must raise this enmagicked girl, whom she calls Luna, as her own. To keep young Luna safe from her own unwieldy power, Xan locks her magic deep inside her. When Luna approaches her thirteenth birthday, her magic begins to emerge on schedule–but Xan is far away. Meanwhile, a young man from the Protectorate is determined to free his people by killing the witch. Soon, it is up to Luna to protect those who have protected her–even if it means the end of the loving, safe world she’s always known.

I have mixed feelings about The Girl Who Drank the Moon – I liked the story itself but it went on for a very long time (9hrs, 31mins) & I felt like it could’ve been a lot shorter. Christina Moore was a fantastic narrator though & even though I’m unsure whether I’d read any of Kelly Barnhill’s other books, I would definitely listen to another book narrated by Christina.

One of the things I did like about this story was the world-building & the concept of a village sacrificing a child to, what they believe is, an evil witch when actually the witch is lovely & caring, & whom has no idea that the people believe her to be the opposite of what she is. I loved Aunty Xan & it was her character that kept me listening to a story that I wasn’t completely invested in – she’s exactly what I’ve dreamt about having as a grandmother & I think Luna was very lucky to have her. Speaking of Luna – I really liked watching her grow up; there are many books that attempt to jump the years how Kelly Barnhill has done with Luna’s childhood, so that they’re able to only show the important events spread over a few years, but not every author gets it right… Kelly Barnhill did. Luna’s development & growing up was the most interesting part of this story & I really liked that part of the plot.

I also loved Glurk (& his story) & Luna’s dragon pal – they added a lot humour to the story & I would love to see the dragon’s transformation (no spoilers here) on the big screen.

This book was full of riddles & I did like it in the end, I just wish it had been around half

the length it was. If you like witches & slow-burners then The Girl Who Drank the Moon could definitely be for you – use one of the links below to get yourself a copy!

One thought on “Audiobook Review: The Girl Who Drank the Moon by Kelly Barnhill (Narrated by Christina Moore)”