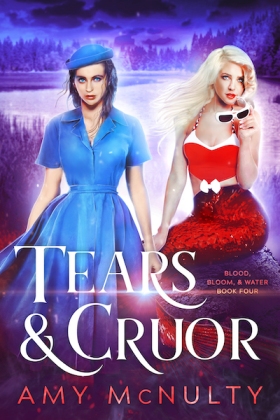 Today I’m helping to show the world the cover of the fourth book in the Blood, Bloom, & Water series, Tears & Crour. This series is action packed & has mermaids – so what more could you want?

I love, love, love how bright the covers are in this series & how the characters stand out so much.

The book is being published by Snowy Wings Publishing & is expected to be released toward the end of the year.

A traitorous mermaid champion. The vampire champion who just wants to see this war end. The battle between blood, bloom, and water is about to come to a head.

Ember Goodwin knows it looks bad that she’s now the champion of water, but she firmly believes that the ends justify the means. Though smitten with her merman prince, she’s beginning to question his motives and promises—and she won’t allow herself to be duped again.

Ivy Sheppard never saw herself crossing sides to become the champion of blood, but it’s the only way to protect her little sister from their treacherous step-sister. What she doesn’t expect is to fall in love with an undead prince whose days might be numbered.

The fourth book in the Blood, Bloom, & Water series sees friend become enemy and adversary become lover in the climax of the battle between vampires, mermaids, and faeries. After the events that unfold, things will never be the same.

One thought on “Cover Reveal: Tears & Cruor by Amy McNulty”