Gothel is a witch. Punished for the actions of her mother, her choice is simple: either she stands guard over Princess Rapunzel—or she dies. But just because a choice is easy doesn’t mean it’s pleasant. Protecting Rapunzel means watching as the princess lays trapped in a tower, bedridden by hair that is so long and heavy it’s slowly driving her insane. Gothel’s life has become one of imprisonment and solitude as well—until a prince and his handsome squire appear at the tower.

Only one object can cut Rapunzel’s hair and end the curse: a pair of magical shears. But the shears are guarded by the most terrifying witches in the land, who also happen to be Gothel’s aunts. As Gothel and the prince’s squire, Raj Talmund, work to form a plan, she finds herself more and more drawn to the mysterious young man from the Outerlands. Unfortunately, his destiny is far more dangerous than she wants to admit: to save a princess, he must kill the witch who’s been forced to guard her.THE WITCH’S TOWER is the first in an inspired new series of fairy-tale retellings from award-winning fantasy author Tamara Grantham. 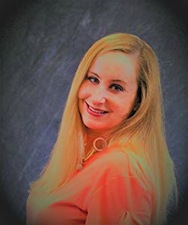 Tamara Grantham is the award-winning author of more than a dozen books and novellas, including the Olive Kennedy: Fairy World MD series and the Shine novellas. Dreamthief, the first book of her Fairy World MD series, won first place for fantasy in INDIEFAB’S Book of the Year Awards, a RONE award for best New Adult Romance of 2016, and is a #1 bestseller on Amazon with over 200 five-star reviews.

Tamara holds a Bachelor’s degree in English from Lamar University. She has been a featured speaker at multiple writing conferences, and she has been a panelist at Comic Con Wizard World speaking on the topic of female leads. For her first published project, she collaborated with New York-Times bestselling author, William Bernhardt, in writing the Shine series.

Born and raised in Texas, Tamara now lives with her husband and five children in Wichita, Kansas. She rarely has any free time, but when the stars align and she gets a moment to relax, she enjoys reading fantasy novels, taking nature walks–which fuel her inspiration for creating fantastical worlds–and watching every Star Wars or Star Trek movie ever made. You can find her online at www.TamaraGrantham.com.

One thought on “Book Blitz & Giveaway: The Witch’s Tower by Tamara Grantham”