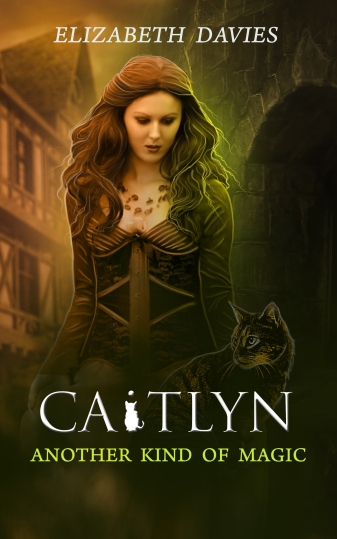 I’m going to have to be honest; I am devastated that I’m revealing the cover of the final book in the Caitlyn trilogy because it means the series is almost over & I’m not sure I’m ready for that!

Nevertheless, I’m just as in love with this cover as the previous two; Caitlyn’s stance says to me that we may see a more insecure side of her in the finale & that this book may be a bit more about her than her new mistress.

“I am a cat. But I am no ordinary cat. I am a witch’s familiar. I am also a woman, with a woman’s heart and a woman’s frailty.”

Nearly two hundred years have passed since Caitlyn was trapped by supernatural forces and black magic, and she has known many mistresses. This time, the witch she is enthralled to is Joan, wife of Llewelyn, Prince of Wales.

At first, this mistress appears no different to any of the others Caitlyn has served – until Llewelyn captures William de Braose, and Joan falls in love, risking everything, including Caitlyn, to fulfil her desire.

Caitlyn, meanwhile, has her own cross to bear in the form of the gallant and reckless Hugh of Pembroke…

Elizabeth Davies is a paranormal author, whose books have a romantic flavour with more than a hint of suspense. And death. There’s usually death…

2 thoughts on “Cover Reveal: Another Kind of Magic by Elizabeth Davies”