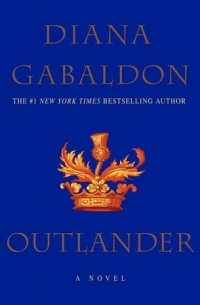 It’s taken me over 6 months but I finally finished Outlander a couple of weeks ago! The reason it took me so long is because I was reading it alongside & then between other books; but, I can’t say I regret being immersed in this story for so long – Diana has done an incredible job with this book & I can’t wait to continue the series.

This book contains scene of a sexual nature & violence throughout.

Like a lot of people, I picked up Outlander because I had watched the TV series based on the books – I’ve not seen every episode that’s been released to-date though… I stopped at the end of series 2 so that I could read the books first. That does mean though, that Outlander wasn’t filled with many surprises for me – I knew the general outline of the story & thankfully was prepared for the vile violence that’s forced upon Jamie at the end of the book.

Speaking of Jamie – I have no idea that he could be more perfect in the books than he is on screen! Sam Heughan is bloody fantastic; not only is he gorgeous, he’s also a tremendous actor & as I’d seen him on screen before reading the book, I was able to picture Jamie so much better than I would’ve done without the TV show (side note: I’ve read, but not watched, the whole A Song of Ice & Fire series & having the on-screen actors to picture whilst reading it definitely made life easier & less confusing). Even without Sam’s influence though, I know I would have fallen for Jamie just as much – he isn’t perfect, but he feels very real & getting to know him so intimately was incredible.

As for Claire – she was even more fantastic on page; she was even more strong, intelligent & comical than she is on-screen & I definitely fancy her just as much as I fancy Jamie. Claire is a brilliant protagonist & reading the book in her/Caitriona Balfe’s voice made the experience so much better. Although the book is split between being character-led & history-led, Claire definitely makes it feel like everything that’s happening around her is happening because she said so… even the bad stuff. Claire is probably the most fierce female protagonist I’ve ever encountered & it’s my dream to meet Caitriona.

The plot of this series is just something I cannot help but love – even if these books hadn’t become a TV show I know I would have stumbled across them at some point in my life because they’re a dream series for me. I adore time travel (Doctor Who is life) & I’m a massive nerd of the history of The United Kingdom – add in my Scottish roots & this book was basically written for me. Also, I know some of you will be thinking “but she hates romance!!” – you’re right, I usually do, but with this much history included I couldn’t resist this series. Plus! This isn’t a YA romance, it has raunchy scenes & the relationship between Claire & Jamie is raw & so real.

So yeah, I loved this book – could you tell? I loved it so much I included gifs; something

I never do…. if you’ve been meaning to pick up this series for a while now, then order your copy now! I cannot recommend this series enough to people who love history as much as I do.
Amazon.co.uk | Amazon.com | Book Depository | Waterstones | Wordery

* if you use the Amazon or Book Depository links to make a purchase I will receive a small fee at no cost to you so please consider doing so.

5 thoughts on “Outlander by Diana Gabaldon”