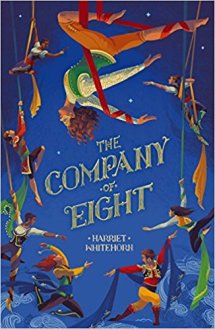 This is the first time in weeks that I’ve been able to read a book cover-to-cover in one sitting & I’m so thrilled that it happened to be The Company of Eight. I wasn’t sure what to expect from this book, but I was blown-away by the unpredictable plot, heart-racing scenes & funny prose. Main character Cass was wonderful, but the world-building was even more so. I am so excited for the sequel.

I was sent a copy of this book by Stripes Publishing in return for an honest review.

I requested an ARC of this book from Stripes because I love all things circus & carnival related; but, what I got wasn’t that much to do with circuses… instead it was a daring & heart-racing adventure, packed full of party ships, pirates, sword-wielding women & a plot that was impossible to predict. This book is aimed at middle grade children, but it had me, a 22-year-old, gripped from start to finish.

I’m going to start this review by talking about the world-building, because as a lot of you will know, world-building makes or breaks a story for me… and wow! Harriet has created such an incredibly fascinating, diverse & colourful world within these 208 pages & I am desperate to dive back into it. I really loved that so much of this world depended on ships – the fact that members of the royal family spend most of their time travelling around all the different islands in this world was so interesting, & it felt so original. I also adored that the circus boat exists; how glamorous does that sound?! Well, it turns out that the actual ship isn’t all it’s cracked up to be, but the whole idea of being in a circus that travels across oceans to perform had me grinning with excitement – no wonder Cass wants to be an acrobat so badly! Honestly, this has got to be up there with some of my most loved fictional worlds.

Now, the plot. This book was totally impossible to predict; even when there were moments when I thought I knew what was going to happen – I still got it wrong. There were so many surprises, good & bad, throughout The Company of Eight that I was kept on my toes at all times. Things could either go really right or really wrong for Cass & it was so hard to predict which way something would go for her. Despite this, the book never felt too complicated or ridiculous; despite the surprises, the story flowed really well throughout & everything felt like it had its place in the story – even if I couldn’t work out what it was to start with.

And finally, the characters. Cassandra was fab-u-lous! She was gutsy, strong-spirited, clever & funny, but she was also very real & we got to see her emotions play out quite a lot on the page. The start of the book is very much character-led; Cass makes a decision & that’s what starts off this death-defying story, but as things continue Cass loses all control of what’s happening around her… despite this, she remains strong & determined, & she’ll inspire a lot of young readers because of that. I also really loved Rip – who I won’t say much about, but he was such a cutie-pie & the events he was at the centre of left me on the edge of my seat more than once. The villains in the book obviously weren’t cutie-pies like Rip, but they were all well written & truly intimidating – their personalities & desires left my heart racing on more than one occasion & I truly thought them to be capable of anything. There are a lot of characters in this book because Cass does a lot of travelling, & if I spoke about all of them it would double the length of this review so all I will say is that I loved all of the good guys & hated all of the bad guys. The characters were well-thought out & suited their roles perfectly, & I’m desperate to know more about so many of them.

I really, really, enjoyed this book, for so, so many reasons; it was full of surprises, had

amazing world-building, had too many heart-racing moments & was jam-packed with brilliant, funny, scary & totally mesmerising characters. I recommend this story to literally everyone. Go read it. Now!
Amazon.co.uk | Amazon.com | Book Depository | Waterstones | Wordery

If you use the Amazon or Book Depository links to make a purchase I will receive a small fee at no cost to you so please consider doing so.