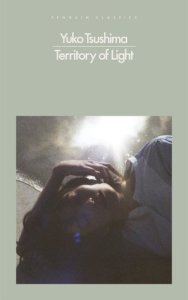 Yūko’s writing in this series of short chapters that add up to a year in one woman’s life felt very natural & effortless, but I’m positive that a lot of thought & care went into portraying this nameless woman’s life. This short book of 122 pages left me deep in thought & intensified my respect for my mother, who raised me alone.

I was sent a copy of this book by Penguin Classics UK in return for an honest review.

This review won’t be long, just as Territory of Light is not, but I can promise you that it will be filled with respect for Yūko & love for this story…

It’s very difficult to explain this book, because there isn’t really a plot – this book is a story of one woman’s experiences as a newly single mother; one who does not want to be alone, but who also doesn’t want to be with her husband any longer; one who loves her daughter totally & completely, but also struggles sometimes & wants to run away. We never get to know this woman’s name, but in this case, her name isn’t important – Yūko provides us with a very intense & intimate look into the protagonist’s life, & the honesty of this story will leave you very deep in thought.

Originally, this series of chapters was released, one chapter at a time, once a month in a magazine; so that by the end of the series you would have spent a year with this woman & her daughter – I read this book over just under a week, but I really wish I had read it how it was intended to have been read… my reasons for this is, one, I feel like I would have developed a very deep connection to a character I had spent a year with; but also because I would have carried on with my life & just stepped back into this woman’s life whenever it suited me – my busy & stressful life would have carried on in parallel to the woman in Territory of Light, & that experience would have given me a much better understanding of how this woman lived in that time. Maybe I will do this, when the story is less fresh in my mind.

I recommend this book to anyone & everyone, but especially the children of single parents, because it will give you a new, very raw type of respect for your parent.
Amazon.co.uk | Amazon.com | Book Depository | Waterstones | Wordery

Rest in Peace Yūko Tsushima – reading this book after your passing just made it so much more emotional for me.