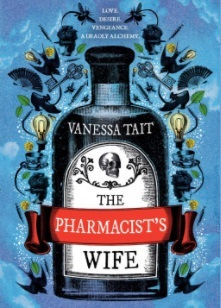 This book was one that engaged & entertained me, a book with a fabulous main character that filled me with a lot of feminist pride, but it was also a book that left me feeling like something was missing at the end; the writing didn’t quite feel gritty enough considering its themes. It was a good read though; one that I found hard to put down.

I was sent a copy of this book by Atlantic Books in return for an honest review.

From the very start this book engaged me; there was never any doubt that I wanted to read this book & enjoy it; & I did, read it & enjoy it, that is – even though it felt like something was missing when I finally put the book down. But lets not dwell on that, because The Pharmacist’s Wife tells a very strong & ironically addictive story of feminine strength & resilience, during a time when women were expected to put up or shut up.

Edinburgh, Victoria’s reign, the height of drug experimentation & sexism; a time when a woman on the throne inspired women to stand up against the men that had held them down for so long. Rebecca Palmer; a woman whose one true love disappeared to a very distant country & so had to settle for a gentleman she hardly knew but seemed to get on with. But Rebecca’s new husband is darker & dirtier than Rebecca ever realised, & it’s only when Rebecca befriends a woman who she shouldn’t be seen dead with that she finds out the horrifying truth of the man she’s tied herself to.

Sounds good? Well it was. I found it so hard to put this book down because it threw so many surprises at me; one second I thought I knew where the story was going, & the next a cold bucket of water was thrown over me as I fell into a trance of shock. This book was dark, a little gritty & so very honest about the history of this great queendom.

Rebecca was fantastic; there is no doubt that she is one of the most incredible women I’ve ever read about in fiction; she was a force to be reckoned with, someone who would not allow the men around her to walk over her & a woman who knew what she wanted & would do anything to get it. She was strong, feisty & so hard not to totally adore. Every woman who reads this book will finish it reeling with feminine-pride. The plot of this story was also fantastic though – there were so many quick turnings & unexpected surprises that I was kept on my toes at all times. I went to sleep thinking about this book; finding myself in a state of book-induced-insomnia because I was so fixated on Rebecca’s journey.

I hated Rebecca’s husband from the start; he was arrogant & self-obsessed, but there was also a dark presence emanating from him that I just could not work out. When it eventually got to the point where I finally understood how evil this man was, I was filled with anger & rooting for Rebecca to come out on top. There were times when it seemed Rebecca would not escape the evil in her marriage, & it was heartbreaking to read because I know that so many women would have got stuck in marriages like Rebecca’s. Women still get stuck in these marriages. And it’s vile. But this book shows how strong women can be; it shows how clever, determined & inspiring we can be & I loved it.

The Pharmacist’s Wife is a survival story; one of survival against addiction, survival against men & survival against the system women are forced to obey. Its difficult to stomach at times, but leaves the reader contented & satisfied at the end. Lovers of The Mermaid & Mrs Hancock, Elijah’s Mermaid & Heloise Chancey will love this book.

You can buy your own copy of the book using the links below: if you use the Amazon or Book Depository links to make a purchase I will receive a small fee at no cost to you so please consider doing so.
Amazon.co.uk | Amazon.com | Book Depository | Waterstones | Wordery

Unfortunately, this book is not available on Audible.

One thought on “The Pharmacist’s Wife by Vanessa Tait”