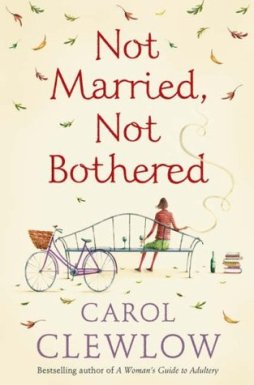 Riley Gordon would not go as far as her best friend, Magda, who has decided to have the full wedding ceremony and celebrations. So far, so traditional. But in Magda′s case, the lucky person she will be saying I do to is herself. It is Magda′s statement for single women everywhere. This is Riley′s call to arms, her challenge to celebrate singleness, and to re-establish that much maligned, splendid word: spinster.

The life of Riley is an excellent one. She has no issues, no life crises. She is celebrating her life. Her mother is not so sure. Her marriage to Riley′s father may have been a mistake, but as a merry widow, at least she is allowed lovers. Her sister, happily married with two children, is certain that married life is the right choice. Riley′s extensive relations, including those in the more successful branch of the family, feel free to give their opinions, frequently and unasked. Her various friends, straight and gay, are delighted to have such available and lively companionship. And her lovers, all ex at present, simply wonder when they might be able to weight the balance from freedom towards themselves.

It’s late. For me at least. So this will either be utter crap or the opposite of utter crap. Unfortunately I cannot predict which one.

This, how do I describe it, strong? feminist? women-don’t-need-men? book took me by surprise. The first couple of chapters confused me, but after around the eighth chapter I was starting to silently laugh and appreciate Clewlow’s writing. To start with it felt like she was forcing a puzzle to be done – forcing puzzle pieces of ideas together despite knowing they don’t actually go together, but insisting that they do because it’s obvious they’re both part of the sky or the grass. But after around “H is for… Heroines” it didn’t matter if the pieces weren’t supposed to go together because the picture being created was still pleasant.

This is nowhere near one of my favourite reads, but I have stayed up to finish it so credit given where credit is due. Although. I did feel like this should be a book read in one sitting. I stopped reading earlier for a couple of hours and when I went back to it I felt the same uneasy forcefulness I had felt during the first few chapters… but my eyes did eventually re-adjust themselves to see the alternative picture being created. When I started to understand the style of writing and the aim of the book I relaxed into it and actually, this story has made me think.

Riley in a lot of ways is completely opposite to me. And I didn’t particularly like her either. But the views and opinions the book produces has got me thinking. It’s never been a question to me, I will have children, to the point where I can’t understand how people can not want to have their own little family – I hasten to add I’ve never had a stick up my ass about it; if someone doesn’t want kids then cool, that’s their decision, but I didn’t necessarily understand it until now. I’d never looked at wanting to experience motherhood as being selfish but now that I think about it, I am entirely selfish in my need to reproduce. I’m not thinking about whether that child wants to be born, for me I want children, therefore I will have them and screw them if they hate me for playing a part in their creation. Don’t get me wrong though, I’m still 100% going to reproduce.

I’d also never looked at the NHS putting so much money and time in fertility treatment in the way Riley does. “the not-yet-born have become more important than the living” a quote that I think will stay with me for a long time. Of all the things the NHS spend their money on I have never questioned why the creation of something that doesn’t yet exist is more important than helping to find a cure for the illness I, a living, breathing, real person, am already suffering from. That’s not to say I think we should stop funding things like IVF, I still hold the strong belief that if you want children you should be able to at least attempt at obtaining some – well. As long as you’re a better person than, say, my father who most certainly does not deserve me, his only child.

This book did also touch me in an emotional way rather than just an eye-opening-to-other-people’s-views sort of way. When Riley made the decision to email Nathan I suddenly started to think this book would end up being happily ever after. And I’m not sure if I would have been okay with that, surely then Riley would just have been contradiction, and it would have killed the realness of the book. But equally when I read the automatic reply she received my heart partially shattered. I stared at that line for a good few minutes, mourning a character that couldn’t have been around for more than sixty pages, and sympathising with Riley how sick she must have felt in that moment. How completely and utterly heart-breaking.

I said to my friends earlier that whenever I finish a book I feel like something in me changes ever so slightly – so that in the moment no one notices, but at some point someone will look back and notice that I’m not the same as I was. This book, for sure, has made a difference to me. And the way I think. Whether fiction or not, Clewclow has opened my eyes to a point of view I have never understood. Although confusingly written at times, I did enjoy this book and I’m definitely happy I’ve read it. Riley’s story gets a 3/5 from me. I’m sure I’ll visit her again one day.