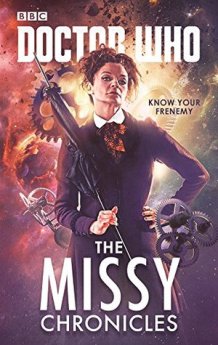 So, very recently I asked Twitter whether I should start posting Doctor Who novel reviews on my blog; the main response was yes so here we are, my first Doctor Who review. When I heard about The Missy Chronicles I was super excited because, hello, anti-villain! The book is made up of six short stories, each written by a different author & overall I gave it a rating of 3.85 – here’s why…

This review contains major spoilers for
Doctor Who: Season 8 onward.

My main issue with this book is that there is only one woman-writer out of six; I know that Missy has been a he in previous incarnations so having men & women contribute makes sense but, surely it should have been an equal split? Or, in my opinion an all woman author list because at this moment in time Missy is in fact a she. Don’t get me wrong, I was overjoyed when I found out that Jacqueline Rayner was the female writer, but they could have thrown in a bit of Jenny T. Colgan as well, dammit! Plus, Jaq’s chapter was the best one out of the lot & some of the men’s contributions fell a little short… I’m looking at you Paul Magrs & Peter Anghelides. Anyway, a star rating of 3.85 shows that I had mixed opinions on the different chapters & now I’ll explain those opinions a little bit more:

Dismemberment by James Goss: 🌟🌟🌟🌟
James Goss opened this book fantastically – finding out how Missy decided on her new name, to go with her new body, is obviously something Doctor Who fans are going to want to know about, but James also made the background story to this decision brilliant & I definitely enjoyed reading it. Missy’s personality post-regeneration was exactly what one would expect of her & I loved the feminist touch as well. This chapter greatly highlighted the differences between how men & women are treated, & did it without being offensive to women at all. Well done Mr. Goss.

Lords & Masters by Cavan Scott: 🌟🌟🌟🌟
Cavan Scott did a good job of writing his chapter as well; Scott’s story was fully immersed within the world of Doctor Who, something which Dismemberment was not, so it was a nice follow up to the first story. I loved the other Time Lords that were included in the story & Scott also did a good job of reminding Whovians that Missy certainly isn’t the only Time Lord with a bad streak.

Teddy Sparkles Must Die by Paul Magrs: 🌟🌟.5
Eugh, Paul, what were you thinking?! Look, I liked the whole Mary Poppins twist that was used within this story, but that was about all I liked… oh & the fact that there are aliens that look like teddy bears. As for the rest, I can’t even explain what it was because I’m still beyond confused. Looking at my 2.5 star rating I’m considering that it might actually be a little generous because the story really was a total waste of time. Next please.

The Liar, The Glitch & The War Zone by Peter Anghelides: 🌟🌟🌟.5
Okay, so, Peter didn’t do as badly as Paul, but he still didn’t do great. The reason this chapter got 3.5 stars from me is because the story definitely fit in well with the Doctor Who universe & it definitely felt like a Doctor Who novel… but, as with Paul’s story, it was a bit strange & nonsensical at times. The title is clever though, which is something I’ve only just noticed. Hm. I liked that Venice was involved though, that was nice. I guess that if this had been a Doctor Who episode (with the addition of The Doctor, of course) it would have been a funny but mediocre one.

Girl Power! by Jacqueline Rayner: 🌟🌟🌟🌟🌟
Oh. My. Goodness. This chapter was by far the best; it was super funny & creative, & was 100% Missy. Can we have this chapter made into an episode please? Girl Power! involves Missy contacting a bunch of strong women from throughout history & is told in the form of letters. There are also letters from The Doctor & Nardole as well, which was fabulous. I smiled throughout reading this chapter because the writing was so good & the personalities of the characters was so accurate; Missy was jumping out of the pages at me & I was so happy to welcome her. Thank you Jaq, for saving me from the awful stories of men.

Alit in Underland by Richard Dinnick: 🌟🌟🌟🌟
Richard & Jacqueline managed to salvage this book so well; in Richard’s story we get to see Missy & The Master together, with a setting that may be a little more than familiar… the relationship between Missy & The Master was the mirror image of the relationship we’ve seen on screen & the story really fit in well with the episode that influenced it. The title of this one is also quite clever, so well done Dinnick (or whoever came up with the chapter name).

So, as you can see, mixed opinions. If we remove Magrs & Anghelides from the equation & replace them with Jenny T. Colgan & another woman Doctor Who writer, then this book could have been spectacular, but alas, it fell a little short. My next Doctor Who read is going to be The Day She Saved The Doctor which has stories about Sarah Jane, Rose, Clara & Bill in it, & the entire author list is female – it’s like the producers of the Doctor Who novels read the start of this review, jumped in the TARDIS to the past & made sure all the writers were women. So thanks producers. Keep an eye out for the review of The Day She Saved The Doctor, if it’s your kind of thing.