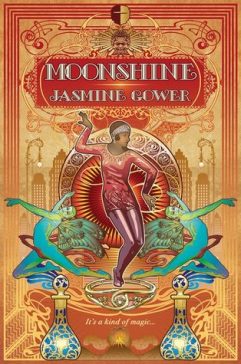 Today is the day that this wonderful book is released & I’m so excited because it’s going to be such a hit! Moonshine is set in a fantasy version of 1920s Chicago & it is full of magic, diversity & action – I absolutely loved it! It tells the story of Daisy Dell, a Modern Girl, & the messy adventure she ends up on after starting a new job – Daisy meets a diverse bunch of people, all with their own personalities, backgrounds & issues & ends up in the middle of some pretty sticky situations. If you love diverse, queer, action-packed fantasy books, that are full of strong women then this is definitely a book for you.

I was sent an ARC of this book by the publisher in return for an honest review.

It’s always, always harder to write a review for a book that you loved so this review isn’t going to be easy, because Moonshine is exactly the kind of fantasy book that I need in my life. You should all know by now that I love historical fiction, & historical fantasy is slowly working its way into my heart as well; I also love magic & a good bit of action, plus, diversity is obviously something that we all want in our books – so, Moonshine is near on perfect. 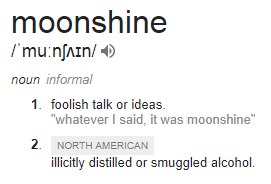 This book is jam-packed full of diversity; the main character is a strong, independent, intelligent woman of colour, her boss is a disabled aromantic, multisexual & allosexual (own voices*) man, her manager is an overweight woman (please tell me if I can say this in a better/less offensive way!), her colleagues are gender-fluid & gay, with many other characters in the book being people of colour; Daisy also befriends a couple of ogres & fairies who are fiercely discriminated against. Plus, almost all of the characters are descendants of immigrants & a large amount of the magical characters were addicted to a magical compound called Mana.

The characters weren’t just diversity box tickers though, in almost all of the characters their diversity influenced who they were as people or how they reacted to certain situations. Mr Swarz, Daisy’s boss, has a disability due to a childhood accident, so he has lived practically all his life with a chronic condition; on some days he requires the use of a walking-stick, but on others he does not. In some scenes he is in a lot of pain & struggles with the limitations of his condition, but in other scenes these things do not bother him. A lot of Swarz’s decisions, & his general role in the story, were affected by his disability, so his disability actually meant something, which was so amazing for me to read. As someone who is chronically ill, I was overjoyed when I met Mr Swarz in the first chapter of this book, & this joy made my heart burst as I continued to read because Jasmine never forgot that Swarz was disabled – she paid so much attention to the smallest details that disabled people deal with everyday & I’m just so, so grateful to her.

Swarz’s character wasn’t the only one that was constantly affected & influenced by the diverse aspect of their identity though – Vicks, the gender-fluid character, regularly changed where on the gender spectrum they identified with, & there was a lovely moment where Daisy asked Vicks what pronouns she should use for them on a day where it wasn’t obvious how Vicks was identifying. Additionally, a lot of the other characters were constantly affected by their addicitions, which is actually a very important part of the book. I’ve even written in my notes that addiction is pretty much the reason the entire plot occurs. Most of the characters in the book are experiencing some kind of addiction to a substance called Mana – Mana enables certain magicians to replenish the energy they lose when creating magic, but Mana is mightily addictive so it’s no surprise that a lot of magicians experience Mana addiction. Throughout Moonshine we were reminded of the addictions the characters had & this often drove a lot of their decisions – it also put a few twists into the story, so it definitely had a good impact on the plot, plus it was definitely interesting to see how some things went wrong because of Mana.

Anyway! Enough about the characters… As I said in the introduction, Moonshine is set in a fantasy version of Chicago in the 1920s! And ahhh, it was such an incredible setting for this story! I loved all of the descriptions of the Modern Girls‘ clothing & found some of the comments made by disapproving people (mainly old white men) so amusing to read (the addition of certain radio stations was genius & I loved the scene where Daisy had a through-the-wall conversation with a man speaking on her neighbour’s radio). There were also small hints of similarities between the current Western world & the one Jasmine Gower has created.

It isn’t just the obvious, most visible parts of this world that make it so good though – Jasmine has also put a lot of effort into the society & it’s history, considering what impacts the immigration of earlier generations would now mean for the generations just reaching adulthood… we weren’t just told that Soot City was only a few generations old, it was a tangible detail that presented itself in lots of small ways that amounted to big things. There was a very clear & accepted discrimination against all those that were different, like magicians, ogres, fairies & certain groups of immigrants, that was very reflective of the discrimination that is normalised in the Western world currently.

“Daisy’s starting a new job and stylish city life, but mage-hunters out for her dark magic threaten to destroy her vogue image.”

The plot was also brilliant as well; reading this book was a totally unpredictable experience for me & I don’t think there was ever a time when I sat there & thought “I knew that was going to happen.” I really enjoyed the fact that the book started off as something quite plain & normal – a young girl starting a new job – with it then developing into this dangerous & messy adventure where everyone’s lives were at stake. The magic of Soot City was also written so wonderfully & I loved all of Daisy’s grandmother’s little trinkets. Adding Mana into the world was also a great idea & it was super original as well.

The inclusion of fairies into the story was also massively fabulous because the plot may not have changed much without them, but the feel of the book & the things we learnt about the characters definitely would have been different if fairies hadn’t been involved (I also adored Cyan & Lavender so I’m glad they were included for that reason alone – any chance of novella Jasmine?!). Additionally, I loved the introduction of Ming into the story (no, I’m not going to tell you who she is), & I liked that we got to learn about her background & the things that drove her to carry out the actions she did. Involving Ming in the plot also gives the reader the chance to learn more about Soot City, so it enhanced the world-building brilliantly. 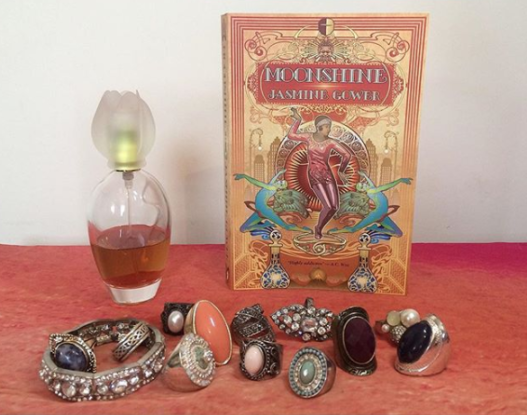 This is a ridiculously long review so I’m really hoping I’ve convinced you to add this book to your GoodReads… or, if you want to be a total rebel & order yourself a copy

Thank you again to Angry Robot for granting my wish of a Moonshine ARC.

One thought on “Moonshine by Jasmine Gower”