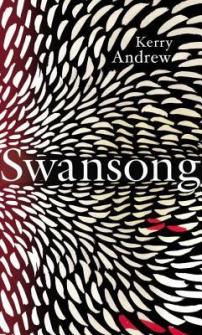 Polly Vaughan is a very modern young adult, with a love of drugs & partying, not much seems to bother her; but after a bad night out with her best friend, a night that involved them convincing someone to take drugs with them & that someone ending up in a coma, Polly runs away to Scotland in an attempt to escape her guilt. Polly’s running doesn’t help her to escape though, instead she becomes even more lost & she finds herself being haunted by the ghost of a girl long gone. Swansong is a messy book with a messy protagonist, but it’s also gripping & full of punch, & I for one loved it.

A few months ago I read & reviewed a fantastic little book called The Taste of Blue Light by Lydia Ruffles (review can be found here) & in a lot of ways Swansong reminds me of that book; although the messages of the books differ somewhat, the style of writing is very similar, in the fact that it’s messy & very reflective of the protagonist’s mental state. Both books also cover mental health, & both books follow very confused & bedraggled teenage girls. They’re also both very addictive reads. If you’ve had the pleasure of reading The Taste of Blue Light I think you’d probably enjoy Swansong too.

Swansong is a very tangled & strange book, but it’s also fiercely addictive & wonderfully immersive – Polly’s moods & feelings are constantly reflected in the writing & I often found my own moods changing along with hers. I became so enamoured to Polly, her story & her emotions that I was picking up my Kindle to read Swansong at every given moment – whether it was whilst I waited for the kettle to boil or during a five minute bus journey, I needed to absorb more of this story.

But, what is the story actually about? I said in my introduction that Polly runs away to Scotland in order to avoid her guilt about that very awful night out in London, but this incident doesn’t have all of Polly’s attention all of the time – after-all, she is trying to run away from it, so not much of the book is dedicated to that night. Instead, we follow Polly as she attempts to make friends with other teenagers in a very small & out-of-touch village, we follow her as she wanders around the countryside with the ominous feeling of being watched & we follow her as she befriends a man that no one else in the village will talk to. I suppose a lot of this book is based around the idea of Polly trying to find herself, whilst she also juggles trying not to lose her mind, catching up on university work before she gets excluded & attempting to keep her mother sweet. Swansong actually highlights very well how much pressure Western teenagers & young adults are under in the current world & because of that, I think it tells a very important story.

It’s difficult to explain why this book was so good – in fact, I just tried to explain it to my boyfriend but I really struggled… to be honest, I think I just enjoyed reading about a chaotic & vastly modern female character, who isn’t supposed to be perfect in any way at all. Polly is supposed to be confused, she’s supposed to be tumultuous & she’s supposed to be struggling with her very modern life. It’s also hard to explain what the plot of this book actually is, because in a lot of ways it just tells the day-to-day life of a very screwed up Polly, but because of the way the book has been written I think a lot of young girls/women will really identify with the protagonist & her feelings of being lost. Kerry Andrew also has a very incredible way of getting inside her reader’s heads & that alone makes this a fantastic read.

Okay, so I’m sorry, this review hasn’t been great; in fact, it’s just as muddled up as Polly, but as I’ve said, it’s hard to explain what Swansong is about… instead, all I can really say is that it’s a great read, one that I was really gripped by, & one that I want all girls my age to read because it shows that it’s okay to be a bit messy. If my review is better than I

think it is & has convinced you to buy this book then you can do so using the links below: if you use the Amazon.co.uk or Book Depository link to make a purchase I will receive a small fee at no cost to you.
Amazon.co.uk | Amazon.com | Book Depository | Waterstones | Wordery

2 thoughts on “Swansong by Kerry Andrew”