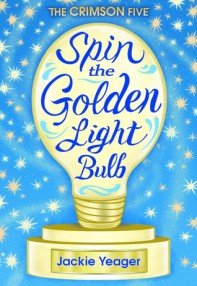 Spin The Golden Light Bulb is a fun, future-set story that reads as a middle-grade/early teen book; it tells the story of Kia Krumpet, her journey into the Piedmont Inventor’s Prep School & through the first round of the Piedmont Challenge. STGLB isn’t perfect, but it is funny & original, & projects important messages of being curious, creative, collaborative, colourful & courageous upon it’s reader. This is a greatly inspiring book for young children, & I’ll definitely be reading the sequel.

I received an eARC of this book from the publisher in return for an honest review.

I have mixed opinions on this book; in some ways I really enjoyed it – it was different, fun & creative, but at times it also felt a little flat & I didn’t feel that all of the inventions that were hyped up by the characters were really that impressive. I never write reviews in this way, but I think it might be the best way for me to present this review because my opinions are so varied…

So, as I said, I had mixed feelings about this book, but a lot of the criticisms I had probably wouldn’t be issues for children reading the book so I still think this is a great story for young readers. Plus, I think the reasons why I enjoyed the book would be amplified in small children. If you fancy getting yourself, or a little person in your life, a