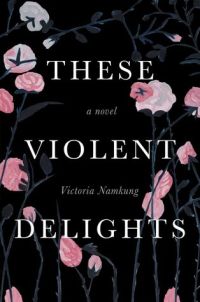 These Violent Delights by Victoria Numkung is an incredibly relevant novel about sexual assault & statutory rape. The book follows the story of the uncovering of a teacher that has been taking advantage of his students for a very long time; the book is not necessarily always a comfortable read, but I think it’s important for women, & men, to read books like this so that they know that they are not alone in their experiences. I have no doubt that this book will lead to someone reporting an assault & so I hope it gets the recognition it deserves.

I received this book from Griffith Moon Publishing via NetGalley in return for an honest review.

I have recently fallen behind on my NetGalley ARCs & so, on some occasions, I have missed out on reading books I had been approved for because of their archive date; thankfully this wasn’t the case with These Violent Delights & I’m really glad, because I feel like I’ve really got something out of this read.

As stated in my introduction, this book follows the story of a teacher, one from a very elitist private school in America, & some of the survivors of his abuse, as the truth of his extensive sexual abuse against multiple students is uncovered. The story takes the reader through the multiple stages of what this kind of criminal investigation involves & is incredibly honest about cover-ups & the way some victims can be treated. It is an upsetting book, but These Violent Delights is also incredibly important right now – probably more so than author Victoria Namkung ever imagined it would be when she first started writing it.

As I have said more than once already, These Violent Delights isn’t an easy read, but Victoria Namkung has done a very good job of easing the reader into the more difficult details of these kinds of stories. When I first started the book I didn’t find it very difficult to read, I imagined that it was going to be a lot more horrifying that it seemed it was, but as I continued to read, the details were slowly made more & more harsh, & by the end of the book I was sobbing. I actually put the book down for a few days because I struggled to deal with the topics, whilst going through some personal things at the same time.

Namkung also did an amazing job with her casting of characters! The criminal in the story, Dr Gregory Copeland, is shown to be incredibly confident & arrogant whilst carrying out his crimes; there was a constant air of authority around him, regardless of which survivor’s story we were reliving, & it was obvious that this was a man that didn’t think he would be caught. Copeland was also, at times, cocky with his behaviour & we find out throughout the book that multiple people thought something was off about him, but that they didn’t realise the true extent of the issue (well, most didn’t). When I was reading some of the flashbacks or descriptions of certain incidents my skin crawled, Namkung did a wonderful job of painting these scenes with her words & she made what was written feel incredibly real.

I don’t want to focus on the dirtbag that is Gregory Copeland though, I want to focus on the amazing survivors that Namkung managed to create. There are a group of women in the book who end up coming together because of their shared horror stories about what Copeland put them through, & something I really appreciated was that they were all incredibly different. Namkung has made a point of using characters that are from all different walks of life; some were from very rich backgrounds, whilst one victim was from an incredibly poor family. All of the victims also had very different relationships with their parents/extended family & each of them behaved differently in school & in their life after school. Each of the women were also from different cultural backgrounds, which helped to bring a further dose of diversity to the story, & this was wonderful because it shows that anyone can fall victim to sexual assault. Each of the women also had dealt with their experiences differently as well, & there was a range of mental health issues & coping mechanisms displayed in the book.

There is a big thing about diversity within literature at the moment, & I am totally behind this; we need more realistic stories, & books with diverse casts like These Violent Delights prove that diversity helps to make books more realistic. Eva was portrayed as being incredibly innocent, despite her school experiences, & she went on to live a very “normal”, Christian life after her assaults. Caryn was my favourite character; she was an incredibly strong Korean woman whom was, by all accounts, not very interested in men – for Caryn there was no question about making Copeland pay for his crimes & I loved that she was so driven by this. The third survivor that is focused on is Sasha; a damaged woman who had been moulded by an incredibly destructive childhood – Sasha was the character that I cried the most for & all I wanted was for her to find happiness again.

There were also a lot of secrets kept by the people who should have protected the trio during their different stretches at high school & I felt it was incredibly brave of Namkung to make it so obvious that people in high positions do cover up these kinds of crimes to protect themselves & their reputations. I also loved how much social media was a part of this book – it helped make the story even more relevant than it already is & definitely added to the story, in terms of people’s vile comments about what happened to the three survivors, but also in terms of the support they received. When looking at this book as a whole, it’s very obvious that it’s covering the type of stories that are currently going on, & this definitely made the book difficult to read, but also made it a lot better as well.

These Violent Delights left me very emotionally drained; it forced me to do a lot of thinking & made me consider how I may have reacted at 15 to a teacher treating me how Eva, Caryn & Sasha were treated. This book is incredibly heartbreaking, but it’s also so important & informative, & I hope that it helps give some assault survivors the strength to report what happened to them – or to at least find some solace in the knowledge that they really are not alone. The ending of the book was devastatingly honest & if it doesn’t make you cry then you’re ridiculous.

Please consider ordering yourself a copy of this book (or get your library to order it in!):
Amazon.co.uk | Amazon.com | Book Depository