This week’s Medical Monday post has been written by a very good online friend of mine; every day is a battle for Caroline due to multiple conditions, but this time she wanted to share her experience with a condition called Mast Cell Activation Syndrome (MCAS). MCAS isn’t a very well-known condition & it’s caused a lot of heartache for Caroline & her family so I’m really grateful that she’s written about it for this series.

This is Caroline’s story…

Hello everyone! First I’d like to thank lovely Lucy-May for opening her blog for Spoonies and their stories, bringing awareness to a myriad of disabilities, diseases, and illnesses. I’m really excited to have the chance to be a part of Medical Mondays and share a bit about myself and my illness, so, as April Ludgate-Dwyer would say, Welcome to the Terror Dome!

I have multiple chronic illnesses, but today, the one I’d like to focus on is perhaps one of the most unknown of my conditions: Mast Cell Activation Syndrome (MCAS). The workings can be a bit complex, but I’ll try to keep it short: Mast cells release chemicals called mediators and there are hundreds of different types, histamines being one type. You know when you’re bitten by a mosquito and the skin welts and itches? That’s the histamine reaction. Now imagine a more intense version, with something like an allergic reaction to a peanut. When people have those allergic responses, histamines are the

chemical mediator that boost blood flow, causing inflammation, and in extreme cases, life-threatening swelling (one of the dangerous symptoms of anaphylaxis), which an Epipen would be used for to open the airways. 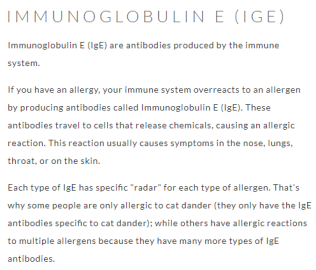 In Mast Cell patients, there may be an over production of mast cells, or mast cells may be malfunctioning and releasing mediators at incorrect times. Often the occurring symptoms are due to the mast cells being so easily triggered, but in Mast Cell patients, chemical releases can even occur without a trigger– yay! Mast Cell issues differ from true IgE mediated allergies (like the peanuts), since Mast Cell is a cellular issue; the triggers can be inconsistent and allergic symptoms can arise without a “true” IgE allergy present.

It’s a lot to take in, I know! It was a lot to write out, and I’ve read this stuff too many times to count. Life with about six chronic conditions can be complex, but this is one of the most complicated. Everything in my life revolves about my MCAS, from what I can eat to the places I can go– even in my house sometimes. Sometimes I can’t even touch my own sisters because they’re wearing something my body can’t tolerate. Sometimes I have to stay in my room all day because people are burning leaves several houses down and the smoke travels and gets inside, and smoke triggers me worse than almost anything.

What I can and can’t have can change hourly. A medicine I took for over a year for my gastrointestinal condition is now unusable. I took it one morning without issue, and again that night but I reacted. That same night in the Emergency Room I reacted to one of my IV drugs that has been my safe protocol for a year. Testing anything is a nightmare right now and it’s given me so much anxiety. Why? I tried a cream from my dermatologist and did careful skin testing (putting it on my wrist or hand in small doses) over twenty four hours and did great. I did two full doses of the cream and it worked really well, it was even minimizing my rash. On the third dose it sent me into anaphylaxis and I used an Epipen for the first time in three months.

My MCAS began in earnest last year. I had the spotty odd issue here or there. Certain bath products made me break out, I couldn’t have honey/any bee products, avocados made me incredibly sick… but, in October it all began when my sister cooked with sesame oil (she used it a lot) and the smell made me faint. It happened again a few days later when I touched the sesame oil. Those episodes kept happening; cigarette smoke, wood smoke… my first anaphylactic episode was to apple juice and I was admitted because I reacted to the steroid they gave me in the Emergency Room and couldn’t walk.

A few weeks later I had an episode where I went into a paralysis and couldn’t open my eyes… We later found a cookie I ate had apple in it. The fainting episodes kept up into the New Year and my Allergist said she knew someone who could help and sent me to the head of Allergy and Immunology at Louisiana State University (LSU). He asked why I felt I needed another condition, because I already had three, then tried to send me to a psychiatrist because it was obviously my nerves. My Ophthalmologist told me that I shouldn’t be allergic to steroids or apples. That’s not possible and I shouldn’t be looking for things to be allergic to.

My allergist who sent me to the LSU allergist dropped me because of his opinions… I was so upset I drank a soda without checking the ingredients and made myself so sick I could barely leave my bed, even to just walk to the bathroom, for two weeks because it’d had apple in it.

Life with a Mast Cell condition is constant survival. It’s constant adaptability and fighting not to pull in on yourself and cave in. It’s fighting to find the reasons to not give up. I have to battle the feeling like I’m too much work for everyone. My current allergist is trying to figure this out, and he’s always saying he wants to figure out how to help me function in the world. It’s hard, because I wonder if that’s realistic. I feel like we’re fighting an uphill battle with no end in sight. Despite this, I’m not giving up. All of these feelings come flooding in so frequently. There are days I can go without feeling so sullen, but when they come I have to push myself to keep fighting. I know I’m worth it, even if I don’t feel it; I remind myself that in other peoples’ eyes I am, and I hold onto that.

One of the tools that helps me live life with Mast Cell is my Vogmask! It’s a fabric mask with an N99* filter, and it’s made with activated charcoal, which helps to filter scent. It’s not perfect, but it’s better for me than a regular medical mask. Plus, the valve does help get a bit of extra air, which is nifty because my lung function has dropped this past year. I pretty much wear it every time I walk out the door because my body is so sensitive to scents, and they trigger reactions in me so fast. I can never know if a smell will cause me to faint, go into an allergic reaction, or if my body will take it with some mild symptoms which are easy to control with a claritin and benadryl.
*This means the mask filters at least 99% of airborne particles. 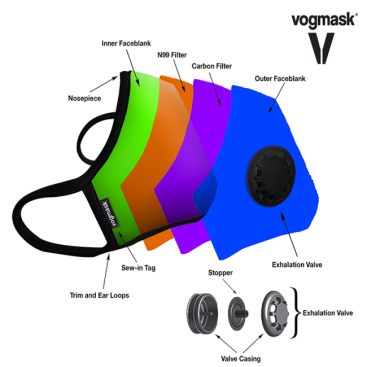 Wearing a mask everywhere I go comes with its difficulties, though. For the most part these days, I get kind comments complimenting my mask and people who speak to me are generally respectful and encouraging. But there are days the stares become a lot. The days when the side-glances and pointing and whispers and giggles– the people who sit across the room and just stare, refusing to look away no matter how uncomfortable it makes me –become a lot. I’ll admit I’ve vented to my family that if I could tell these people one thing, it would be, “Please let me live my life without feeling like a zoo exhibit. Would you want to be treated like this?” I understand their curiosity, I do… But I suppose I want the empathy and understanding to be returned and my space to be respected, and allowed to sit in my doctor’s waiting room without wanting to hide under a chair.

When I first began having to wear masks, it was a point of anxiety for me. I didn’t want to. I hated the stares and the looks I got. But I had to, because my health was at risk, so I took the treatment. But the negativity was all I saw. It was all I felt pressing on me, until the last person pushed me over the edge with a whispered lewd comment in the middle of a restaurant; a man in his fifties giggling like a school-boy as I tried to hold my head up and get out as fast as I could, holding back tears. I didn’t tell either of my parents who were with me because it felt so gross and disgusting. I wanted to deal with it on my own.

Of course, I didn’t. I went into a depression and stayed in my room with my air purifiers. I hated the black mask that gave me what little freedoms I had left and didn’t go anywhere unless I had a doctor’s appointment. It was my sister who finally tattled and told my mom what happened, and she and my dad bought me a new mask, this one colorful and patterned, hoping it would cheer me up and maybe (just maybe) be less threatening to people… I’m kind of known for my resting face.

The depression didn’t go away immediately, and I still battle that dark beast, and the stares and comments about the mask do come. But I what I did get through that experience was a better tool; support. The color and pattern of the mask didn’t really matter to me at that point, but the fact that I had a family willing to do so much to keep me safe and make sure I was taken care of was enough to help me pick myself up and want to fight.

Life with a Mast Cell condition is difficult and exhausting. It’s holding back tears in the back of ambulances because you just want it to stop. I have to explain Mast Cell conditions to everyone. Every nurse, paramedic, doctor, friend, acquaintance, and cashier; but what I do get to do every time I explain it, is spread awareness. My mask that brought me so much heartache has become my strongest tool, because it’s made one of my most dangerous invisible illnesses visible; it brings this issue to light so I can educate, but the stares are still hard some days, there’s no hiding that. But I’ll handle the stares, because for all the people who stare, there are the few who choose to speak up with respect, love, and curiosity; and it’s with them I believe that awareness begins.