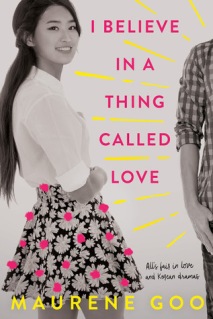 This hilarious & warming book is a little different from what I usually read, but I nonetheless absolutely loved it! I laughed so much & saw a lot of my teenage-self in main character Desi. This book is great for lovers of romance, but also those who love to laugh whilst reading and for those who need a relaxed & heart-warming read!

As soon as I finished reading the prologue of this gorgeous book I knew that I was going to be laughing & smiling throughout the story; I Believe In A Thing Called Love was such a happy book, that also made me think a lot about my teenage years & the ridiculous ways in which I used to behave when I was besotted with someone!

I Believe In A Thing Called Love is all about Desi & her inability to charm boys, despite the ease at which she floats through every other aspect of her life; during the read we follow Desi as she hatches a plan to make the new guy at school, Luca, fall in love with her – & it’s absolutely hilarious. I laughed so much during this read & it’s definitely a book I can see myself reading again (once I have my own copy of it); it’s a lot like one of those romance-comedies that you can watch again & again without getting bored, despite knowing the outline of the story. Maurene Goo totally charmed me with her wonderful (diverse) characters, her lighthearted way of writing & her understanding of just how ridiculous teenage-dating can be!

Another reason why this book is so great though, is the fact that the characters aren’t two dimensional – despite the lightheartedness of the story, Maurene made sure that her characters still had depth & the book actually turned out to be a lot deeper than I expected it to be. I don’t know if everyone who has read this book experienced what I did, but I found myself thinking a lot about Desi, her father, & the life they live, & how Desi’s character was affected by the death of her mother. I liked that, although on the surface it doesn’t seem like childhood trauma has affected Desi, that we get to learn that it has affected her – just not in the stereotypical way of rebelling or running away to fight the government. It was great to see a character who, on almost all fronts, was pretty damn perfect; despite losing her mother – not everyone who experiences childhood trauma turns into a terror!

The Korean culture weaved into I Believe In A Thing Called Love was another reason why I enjoyed this read so much; Korea was the first Asian country that I really started to research & look into the history of, but I don’t actually know much about modern times in South Korea, so this it was really great to read about some of the traditions Desi & her father continue, despite being in America. I also loved how honest Maurene was with Luca’s ignorance of Desi’s background culture, & how this was shown in a positive way, rather than in an negative way. I especially loved the first cooking scene with Luca, Desi & Desi’s father. I also loved that the whole story revolved around Korean Dramas & I definitely need to watch some online! Having the book set up so that the main drive of it was the K-Dramas was just so different to other books & was just really fab.

Despite how much I love this book, I do need to mention one thing that bothered me; right at the start of the book Desi watches a scene in which a male character basically forces a female character to kiss him back & Desi found this “hot” – this felt a little irresponsible to me so I felt it was important to mention it… it absolutely did not affect my enjoyment of the overall story though & as I’ve said, I probably will read it again!

If you fancy getting your hands on a copy of I Believe In A Thing Called Love then you can do so using the links below (or you can do what I did & get it from your local library)!
Amazon.co.uk | Amazon.com | Book Depository | Wordery

Unfortunately, the book isn’t on Audible, which I think is a real shame as I would probably rather have an audio version of the story, instead of a book! I’ll definitely be tweeting Farrar, Straus & Giroux Inc about this!