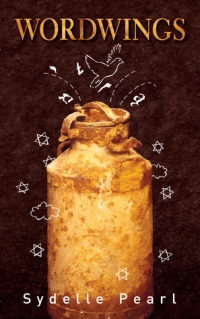 Today Wordwings by Sydelle Pearl is being released into the world! Wordwings is a story that tells the tale of a young Jewish girl called Rivke, who is made prisoner inside the Warsaw Ghetto – a cornered off part of Germany-occupied Poland during World War 2. Much like The Book Thief, Wordwings highlights the importance of books & stories & how they are able to inspire hope even during the darkest of times.

I was sent an eARC of this book by Guernica Editions in return for an honest review. 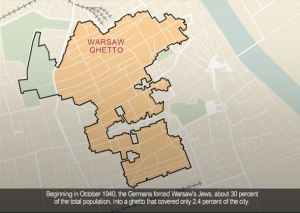 Wordwings was a very emotional read that taught me about a part of World War 2 that I previously knew nothing about. The Warsaw Ghetto was an area in the capital of Poland that was blocked off between October & November of 1940, eventually using a high brick wall, to stop the Jewish residents from interacting with the non-Jewish residents in Poland. The prisoners of this area were taken from their own homes & forced into this small cornered off area, & in the end there were more than 400,000 people living within 1.3 square miles. The living conditions were horrific with an average of 7 people per room in every building (including places of worship); the residents who were trapped within Warsaw were effectively starved to death, & anyone who was still alive when the Germans realised they were losing the war, were marched to a number of concentration camps to be murdered by the Nazis. At the end of this review I will include some websites where you can learn more about Warsaw, & at the end of Wordwings Sydelle Pearl has included a bibliography of sorts.

Wordwings itself follows the story of a fictional family, with the book being written in a diary style by a young girl called Rivke – now, although Rivke, her sisters & her grandfather came from Sydelle Pearl’s imagination, a lot of the characters in the book were real people & the events within the book are based on things that are proved real through real diaries found in time capsules under the ghetto. When I read, in the author’s note at the end of the book, which of the characters were real & which events actually took place it left me very unsure of how to feel – I adored the strength & courage of every person I read about, but it also upset me to know exactly what some of those people had to face. As I always say when I read these books, it always breaks my heart to know that what I’m reading really happened, & because of the author’s note in this book, that heartbreak was amplified. 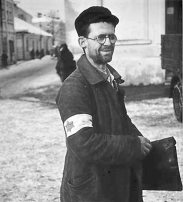 A man wearing a Jewish armband

Rivke herself was very young & had a great passion for the stories written by Hans Christian Andersen, & she spent her time within Warsaw working for the secret library, telling, writing & reading stories, helping her grandfather sell his pillows & Jewish armbands, so they were able to buy food, & looking after the other children of Warsaw. Rivke’s kind heart is what really pulls this story along & the stories she writes herself are so deep & meaningful that I couldn’t help but cry. The stories that were included as Rivke’s own creations were, on the surface, fairytales, but when thought about properly they always told the story of the people stuck in Warsaw. Rivke’s ability to write such emotional stories helped to highlight how special stories are & why the Nazis were determined to burn as many books as they could.

As Wordwings is written in the style of a diary, there were times when the story felt a little jumpy & occasionally there would be days missed out between entries; the writing also came across in parts as simplistic, emotionless & juvenile, & I have seen other reviewers say they didn’t enjoy the book because of these things. I, on the other hand, felt the simplicity/bluntness of the writing helped remind me that the diary belonged to a child & the juvenile touches made me think about the innocence of children, & I was left hoping that the real children of Warsaw also got to experience some of the joy that the fictional Rivke did.

As I found when reading The Red Ribbon by Lucy Adlington, the children who were taken prisoner by the Nazis weren’t always totally aware of what was going on around them, or if they were, they were able to ignore it & find something fun or joyful to focus on instead. Books like Wordwings & The Red Ribbon only work because the protagonist is a child, & through reading a child’s experience we are able to see World War 2 in a different way to that which we would with adult protagonists. As well as Wordwings having similar themes to The Red Ribbon, the book also shares a lot of similarities with The Book Thief by Markus Zusak; in both Wordwings & The Book Thief, stories help the protagonists cope with the horrors they are facing & if you liked The Book Thief I recommend this book to you as well.

Wordwings ends on a very blunt note; Rivke simply runs out of space in her diary & so the story stops – what we do know about what happens next from the diary entry is that her diary was going to be put into one of the time capsules that was going to be buried underneath the buildings in Warsaw. What we know about what happens after that comes from the author’s note, so it is essential that every reader reads the chapter by Sydelle Pearl at the end of the book. This chapter provides a lot of facts about Warsaw, how Sydelle built up Wordwings & what the likely outcome of Rivke’s life would have been. This chapter is both heartbreaking & incredibly informative, & I have decided that I’m going to read a number of the books mentioned by Sydelle in this last chapter.

recommend it to anyone who has an interest in either of these things, as well as World War 2. You can order your own copy of the book using the links below:
Amazon.co.uk | Amazon.com | Book Depository | Wordery

Websites Where You Can Learn More About Warsaw:

2 thoughts on “Happy Book Birthday to Wordwings by Sydelle Pearl!”