This weeks Syringomyelia Saturdays post has been written by an online friend of mine called Ross. Ross doesn’t just have syringomyelia, he also has a condition called Chiari Malformation; a condition that often comes hand-in-hand with syringomyelia. There are two types of Chiari Malformation; the most common type is Type 1 & involves the back of the brain slipping onto the spinal canal; this puts pressure on the brainstem & spinal cord which causes a whole bunch of issues. You can read more on the NHS website & you’ll find Ross’s story below!

Hi, My name is Ross, and I was diagnosed with a Chiari Malformation and Syringomyelia when I was 15 years old. I have always had medical problems, including another condition called Goldenhar Syndrome (click here to find out more about Goldenhar Syndrome), which can affect pretty much everything in the human body. This syndrome had caused problems since the day I was born and resulted in me having a heart operation when I was 10, as well as loads of medical tests for other related issues. So by the time I found out about my Chiari, I was already used to going to hospitals and having tests done. I think this actually helped with dealing with Chiari in the beginning, as the MRI machines or doctors being concerned, didn’t scare me.

Apart from the heart problems mentioned previously, I was completely normal up until my 18th birthday, even passing my driving test after only a few lessons. Just after my 18th birthday, I elected to have double jaw surgery to fix a few issues caused by my Goldenhar, everything went fine, or so I thought…

A few weeks after the surgery I started to notice my eyesight was getting worse, I couldn’t see writing on signs and I started to have trouble with walking and driving in a straight line. After a week of this, I chose to stop driving until I got it sorted out, and that’s about the time I began to get a ‘pressure’ like pain in the back of my head. After I few eye tests I was diagnosed with Nystagmus (click here to find out more about Nystagmus) and was told to see my neurosurgeon. I was sent for an MRI and that’s when they found the Syrinx in my spinal cord, which is a build up of fluid in a cavity within 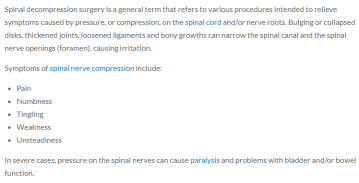 the spine caused by the Chiari (Note: not all syringomyelia is caused by Chiari). I had my decompression surgery in December 2013, while on Christmas break from uni. Of course, it wasn’t a normal decompression, as my spine hadn’t formed correctly (which is part of the Goldenhar Syndrome) so I needed a full cervical spine reconstruction after the decompression.

The recovery was horrible! I couldn’t walk for a week, my parents had to bring my bed downstairs and set it up in the living room as I couldn’t use the stairs, using more or less than 2 pillows caused a blinding pain in my neck and I needed help just to sit up on the bed. But I did get better, and felt nearly normal after 3 months. But the pain came back and in December 2014 I went in for another operation to replace a disk in my spine. I managed to keep up with my university work during all of this, and never missed a day, which I am proud of. Even 2 and a half years after the disk replacement, I am still in constant pain, I’ll never be able to drive again and I doubt I will ever be able to work a normal job. But that doesn’t mean I will let it stop me from doing what I want to.

I loved going to the gym before my symptoms started, and even though it took me 3 years, I am now back at it. I can’t do any cardio as the pressure pain gets really bad, and I’m definitely sore after lifting weights, but it’s still worth it to me. I managed to get my degree in computer networking too, so I taught myself web development and photography, and help out local companies whenever I can.

I’ve found that my symptoms are worse if I stay in the house and don’t do anything, so I force myself to stay active. I think the most important thing to remember, for anyone that has Chiari or any other chronic illness, is to not give up. If you want to do something, do it! There will be compromises you will need to make at times, but you can still do anything you want to.