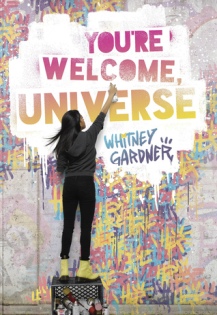 I have wanted to read You’re Welcome, Universe for a while now & I’m so glad I finally did; this book is an educational one but it’s also realistic, exciting, funny & a little emotional too. The cast is realistically diverse with a Deaf protagonist, interracial F/F parents & discussions about eating disorders as well. I recommend this book to anyone who loves contemporary YA because it’s honestly just a really great book.

Trigger Warnings: This book contains a character who is dealing with an eating disorder

My attention was first drawn to this book when I asked Twitter to recommend me books with disabled protagonists; as I don’t know much about being Deaf or the Deaf community, this book was a chance for me to educate myself on a topic that I really should know more about. I was also interested in how Julia would cope with being in a mainstream school, one not equipped for Deaf students, after she was kicked out of her last school for “vandalism”; I’ve also never read anything that involved street art or graffiti so I thought that would be interesting too.

I found it really interesting to learn about how Julia coped when she moved to her new school; it made me think about how my own high school would have reacted to a Deaf student. If I’m honest, I don’t think many of the students at my school would have dealt with it very well – I went to an all girls school, & girls really can be super nasty… despite that, I can think of some girls who would have taken the Deaf student “under their wings” to make sure that she wasn’t being picked on & to make sure they had everything they needed. I don’t believe that Julia would have been ignored as much at my school as she was at the school used in this book; but we didn’t have boys who would throw balls at the back of a Deaf girl’s head (I’m still very mad about that scene) so maybe that’s the major difference.

In terms of being disabled, I think this book hit the nail on the head – Whitney Gardner did a brilliant job of showing how lonely being disabled can be, & that’s one thing that I really loved about the book. Julia’s Deafness also wasn’t portrayed as being something bad, despite how the world around her reacted; Julia was proud of being Deaf & she wasn’t that bothered about what “hearies” thought of her (well, most of the time). I also liked that the normal teen drama was included in this book because it shows that Julia can still deal with normal teenage stuff, even though she’s different. I thought her so-called best friend was a total bitch (although I appreciated this because it, again, showed that disabled teens aren’t much different from abled teens), & the part-time love interest was such a typical teenage boy. She deserved better from both of them. The new friend Julia made at the new school was super sweet, even if she did mess up a little bit, & I really liked that she had her own issues & personality that were totally separate from Julia’s.

I want to include a very quick paragraph about Julia’s parents; her mums were written so well & they made me laugh – I also loved that they bought pizza whenever something really good or something really bad happened! Julia’s parents’ relationship wasn’t forced or fake, neither was it included just to tick some boxes; their relationship just fit into the story as any other parent relationship would do & it was so nice to see parents positively represented within a YA novel. I also loved that theirs was an interracial relationship because there’s really not enough of that within literature.

Now, a big part of this book was Julia’s love for art – this passion of hers isn’t something I understood before I read the book but I guess it’s not that different from my passion for reading; it’s just another form of escape. I didn’t relate to Julia much at all over her love for street art/graffiti but it was interesting to read & it was also different, which I of course appreciated. Street art/graffiti (which I will never spell correctly the first time) isn’t something that many books revolve around so it just helped to add to the character of this gorgeous novel.

When I finished this book I had a smile on my face & I was just so happy I had read it; it was amusing & educational, but it also felt very real & honest (even if one scene did seem a little far-fetched). In my reading notes I’ve written “so lovely to read about people who aren’t considered the ‘norm’, whilst making it feel ‘normal’” & I think that sums up how I felt about this book pretty well.

If you fancy buying yourself a copy of this book you can do so using the links below:
Amazon.co.uk | Amazon.com | Book Depository | Wordery