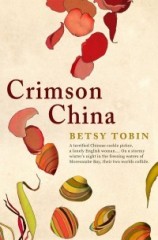 Crimson China was a book that I wanted to keep reading, but for reasons totally different to why I picked it up; I picked up Crimson China hoping to get descriptions of characters with PTSD, but unfortunately there was very little regarding the trauma the characters had experienced… instead I got to learn about something I have a real personal interest in & got to have a nice break from all the fantasy I’ve been reading lately.

In terms of the reasons I picked up the book, Crimson China was a disappointment; there was very little focus on Wan & Angie’s traumas, & there was a lot less writing about how they were coping with their issues than I had hoped for… but (& it’s a good but), I did actually enjoy this book.

The book is focused on two separate timelines that eventually cross over & I was always really interested in how & when they would do so; one of the timelines was Wan’s – a Chinese illegal living in England, whom was forced to do some very hard labour for very little pay. One night Wan was part of an accident where several of his “colleagues” died, but he was saved & after had to remain hidden from the government; acting as if he had actually died. This led to his twin sister Lilli getting a VISA so she could go to England to find her lost brother’s soul, but what Lilli didn’t know was that her brother was very much alive, was living with an alcoholic English woman & had kept many secrets from her over the years. Their two timelines eventually crash into one another, causing some serious emotions to come pouring out.

My favourite of the two timelines was Lilli’s… when Lilli comes to England she gets a job in a school teaching Chinese, but she eventually ends up moving in with a man & his adopted Chinese daughter, to work as a live-in Nanny. As soon as I found out about May, the young Chinese girl, I was really excited – as I’ve mentioned in another review before now, I have always wanted to adopt from China, so getting to read about May’s experiences as a child adopted from China & taken to England was really intriguing for me! I loved the connection Lilli built with May, but I also loved who Lilli was as a person; she was quiet & awkward, a young woman with a very pure & honest heart, who found the ways of England very confusing. Her whole character was written very openly & honestly, which was quite different from how her twin brother’s story was written.

Wan was basically the opposite of Lilli, he was more outgoing with different ambitions; but similarities were there in how they found England to be a very alien environment & how they both tried very hard to work their way into being a part of an English community. Wan’s story starts with him being saved from the ocean by a total stranger called Angie. Angie is a woman who has experienced a lot of trauma in her life & has learnt to deal with this through drinking alcohol (particularly whisky). I found Angie really interesting, & the dynamic between her & Wan was different from anything else I’ve read about… you see, Wan’s English was not very good & Angie couldn’t speak English, so their romance built on body language, intuition, the looks they gave one another & each of their daily habits. The pair became intimate on a very different level from most of the romances in books & it was actually quite refreshing to read.

Throughout the book Lilli & Wan end up experiencing & doing things that they didn’t think they were capable of, & Wan ends up getting most of the characters into trouble; which was actually the part of the plot that interested me the least. I liked this book because it was original, & because it wasn’t a basic introduction > build-up > dilemma > conclusion type book; instead it read like real life should do. But at the same time, the lack of tension & excitement meant that I wasn’t desperate to finish the book – it was a comforting read that was nice to pick up after a day of revision, but I don’t think it is one that I will read again. If there were a sequel to this book I would probably pick it up, but only because I’m curious about what decisions Lilli will end up making – her story really was the part of the book that really drew me in.

If you fancy reading this book too you can order a copy here:
Amazon.co.uk | Amazon.com OR you could borrow it from your library like I did!