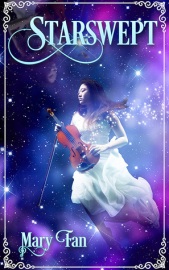 Starswept is a future-set fantasy, sci-fi romance that left my heart racing on multiple occasions. This book is separated into two parts; the first is mushy & cute, whilst the second half is action packed & full of tension. This story was completely intoxicating & I’m thrilled that Mary is planning a sequel.

I was sent an eARC of this book in return for an honest review.

This book opened with a fast paced & information packed first chapter, which left me with the knowledge that this story was going to be incredibly original & incredibly exciting. Iris was an adorable main character, who was nervous & awkward, but with an incredible talent. I felt a connection to Iris quite quickly; the way she described how she felt like she didn’t really fit in reminded me of how I felt at school & I think this helped to create an emotional attachment very quickly.

The story slowly started to show signs of being a sort of Romeo & Juliet type love story, & I was never fully convinced that Iris could trust her Romeo. The whole first half of the book was very much written as a fantasy romance, & although I enjoyed the writing & the story, I definitely preferred the second half. Despite this, I understand that the first half had to be included & written how it was; it was done so that the second half could have a really emotional effect on the reader. The first half helped me become attached to the characters & helped to fully immerse me in the world & its lies.

The second half was a dramatic change from the first – the pace of the story increased quickly & my heart was left racing on more than one occasion. Starswept went from a fluffy romance to an intense adventure full of danger & excitement. Part of me really wishes the second half had been longer; I was enjoying it so, so much & loved how the story was planning out. I loved watching the secrets of the Adryils unfold & became totally addicted to the intoxicating plot. Before I started reading the book I asked Mary whether Starswept is going to be part of a series, & she told me that she was planning a sequel – now that I’ve finished the book this knowledge has made me so excited! I know I’m going to have to wait ages for the sequel though, & that’s so, so sad. I’m really excited about this series.

So I’ve said that I really enjoyed this book, but one thing that bothered me was that some of the paragraphs became a bit repetitive… Iris kept repeating that she had to be careful so the Adryils wouldn’t work out that she wasn’t like the others, & it got to the point where I was like, yes Iris, I know, we have established this half a dozen times already [insert eyeroll here]. That’s probably my only criticism though – there was a diverse cast & the plot was really interesting. The two parts of the book enable the reader to fall totally into the world of the book, for it to then be ripped up from under them. There was constantly an air of unpredictability surrounding the story & there were so many occasions when I genuinely wasn’t sure what was going to happen next.

Starswept was ridiculously intoxicating & I was super addicted to the story from the outset – it seems I’m starting to enjoy romances… Mary Fan’s writing was fab & I love the world building; I cannot wait to find out more in the sequel. I will 100% be buying a physical copy of the book if one is made available in the UK as its cover is absolutely stunning.

7 thoughts on “Starswept by Mary Fan”