Throwback Thursday involves me picking a book I’ve previously read to talk about, today I’m going to discuss Neverwhere by Neil Gaiman. You can find my original review here. 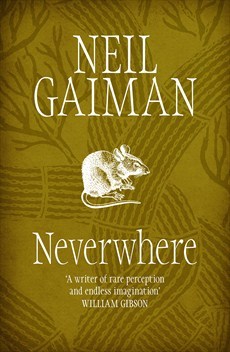 Under the streets of London there’s a world most people could never even dream of. A city of monsters and saints, murderers and angels, and pale girls in black velvet. Richard Mayhew is a young businessman who is about to find out more than he bargained for about this other London. A single act of kindness catapults him out of his safe and predictable life and into a world that is at once eerily familiar and yet utterly bizarre. There’s a girl named Door, an Angel called Islington, an Earl who holds Court on the carriage of a Tube train, a Beast in a labyrinth, and dangers and delights beyond imagining… And Richard, who only wants to go home, is to find a strange destiny waiting for him below the streets of his native city.

Neverwhere by Neil Gaiman is fantasy written at its absolute best; set in London, this book is wonderful for people who know the city well, as they are able to imagine locations in such a magical way, or for those who wish they could visit the city as they get have a totally different experience from everyone else. As someone who grew up spending a lot of time in London, I love fantasy books that are set there as I love picturing all the amazing & magical things that happen in books, happening somewhere that I know well.

Gaiman has taken a beautiful & curious city & made it even more of both – he’s created some amazing ideas using facts about London or their locations (such as the Angel of Islington) & written the book so well that its easy to believe everything you’re reading is true. London has always felt magical to me, & although I could never live there permenantly, it was once like a second hometown to me. London is always incredibly busy, with so many people just trying to get on with their day, but Neil Gaiman makes you believe that if you stopped for just five minutes, & paid attention to everything going on around you, that you might just see an Earl holding court on a Tube train carriage.

If you wish to purchase the book you can do so here:
Amazon.co.uk | Amazon.com & Neil is of course on Twitter!