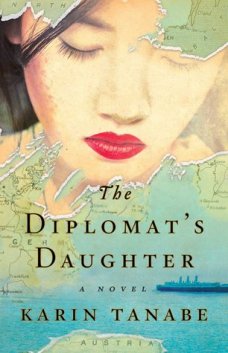 The Diplomat’s Daughter is in part a story of love, but is also a story of hope, tragedy & survival. I read scenes unlike any other I’ve read before & also learnt things about the war that I did not know before. This book is beautiful in every way & Karin Tanabe has done an incredible job with it. I was given an advanced copy of this book to review & I cannot say how glad I am that I was. This is my favourite read of the year so far & I have a feeling it will still hold that spot by the end of the year.

This review may contain some spoilers!

Disclaimer: I was sent an eARC of this book via NetGalley in return for an honest review.

Please note that this book contains scenes depicting rape, miscarriage & war, as well as anti-semitic language/hate speech & racial slurs appropriate to the time period of the book. There are also many scene of human suffering that some readers may find difficult to read.

This beautiful book opened with a very heartfelt foreword written by the author Karin Tanabe, in which she explained her own links to the locations explored in this book & how she carried out the research for a story with as much detail as this one. I have read a lot of historical fiction about Asia & Asian characters in America by Asian & non-Asian authors, but I was glad that this book was written by someone with Asian heritage as it added to a lot of the emotion I experienced. At the start of the book there was also a note from the publisher asking reviewers not to include any quotes in their reviews, which is something I am sad about, but I understand – for that reason I won’t be able to quote a few lines that I found very poignant but I will add them once the book has been officially released.

The Diplomat’s Daughter is separated into three parts & each part is a story in its own right; the first part opens at the end of 1943 when Japanese Emiko “Emi” Kato, the daughter mentioned in the title, is on an overcrowded boat travelling from America to Japan after deportation. We learn a little about Emi & her privileged life before The Second World War took hold, & we learn more throughout the book. Emi is the central character & I found myself becoming very attached to her – I saw similarities in our personalities, despite our differing backgrounds, & I started to admire her very early on in the book. Throughout The Second World War, Emi grows from a spoilt & protected young lady whom relies heavily on her parents, into a woman who will do almost anything to survive. The prologue is full of intense detail that totally drags the reader into the time period & the atmosphere of the book; Karin has a beautiful way with words & I wasn’t able to read a single piece of descriptive text without feeling huge levels of emotion.

Next we are introduced to Christian Lange – an American born rich boy who lived with his German parents in an incredibly wealthy suburb. The first chapter tells the tale of how, in early January 1943 Christian & his family were taken away by the American authorities to be sent to a concentration camp. Readers are told details of Christian’s life up until this point & are shown that money & status don’t always mean anything during times of war. For the whole of his life Christian had been mollycoddled by his mother & father, & had no idea what the rest of the world was like – his character remains fairly innocent throughout the entire book, at least in comparison to his friend Jack, but we get to see him grow from a smothered boy into a strong & brave man.

The final character that the book focuses on is Leo Hartmann, a Jewish boy from Austria. Again, Leo is from a well-off family but this of course changes as Hitler’s rule takes over Austria – Leo & his family are forced to flee to Shanghai, where their lives become incredibly difficult & very different from what they’re used to. Leo is a character that ended up surprising me on a few occasions, sometimes with his actions, but also with the love he is capable of & his undeniable courage (which, admittedly, bordered on stupidity in one scene). Some of the scenes including Leo & his family were very difficult to read but were also eye-opening, & of course key to an accurate war-time story.

Both Christian & Leo end up having huge impacts on Emi’s life, Leo before the war & Christian during the war, with both stealing Emi’s heart. We are thrown between this book’s “present” & its past as we are taken on a journey of bravery & love, but also huge sadness & injustice. There are scenes in this book that truly shook my core & forced me to face some awful things from history; there is a lot of death in this book but also pain experienced in other ways & scenes that are truly traumatic. There will be some readers that may not be as emotional during their read, but for me I learnt about things I had no idea about, & also read my first World War Two battle scenes – which were incredibly difficult to stomach. There were multiple occasions where I had to stop reading for a moment to process what I had read, especially during the rape scene & the scenes where the Hitler Youth were involved. Reading about how Jewish families & individuals were treated during the war honestly broke my heart & in the scene where Leo himself is hurt, I was genuinely shocked by how much harm one human can do to another, even without weapons.

Despite the harsh-realities shown in this book, I am glad I read it & it is definitely one of my favourite books; this is because I learnt & felt a lot, & the writing was exquisite. This book is not sunshine & rainbows, as I have said, it is brutally honest, but the story is a beautiful one that Karin Tanabe should be very proud of. There are a lot of people whom do not know about a lot of the things discussed in this book & that is why books like this are so important. The Diplomat’s Daughter made me very sad & angry, but also gave me feelings of hope & love; it also made me proud to know that Britain were on the right side of history (although I do know our soldiers were not angels). I am filled with so much joy that the publishers allowed me to review this book before its release & I hope this review is up to their standards.

I’ve ordered a copy of this book & if you would like to pre-order The Diplomat’s Daughter too you can do so here:
Amazon.co.uk | Amazon.com

5 thoughts on “The Diplomat’s Daughter by Karin Tanabe”