Untold centuries ago, the Archipelago was ruled by the Alder – mysterious beings who vanished, leaving behind only scattered artefacts of unknown power, called Vestige. Sometimes, a person will be lucky or unlucky enough to discover that each piece of Vestige has its own tale to tell…

As a mini series attached to the Micah Grey books, The Vestigial Tales gives readers more insights into well-loved characters from the main series, as well as the history of Ellada & the Alder. The series consists of five short stories: The Snake Charm, The Fisherman’s Net, The Tarot Reader, The Card Sharp & the Mechanical Minotaur.

Be prepared for some very minor spoilers!

It makes me so very happy when authors write short stories to go with their books, & when I found out about this mini series I was so excited. The Micah Grey series is very possibly my favourite series & I feel so privileged that Laura has asked me to review the short stories.

The Snake Charm: 🐍
The Snake Charm is set before Micah’s time in R. H. Ragona’s Circus & tells a quick tale about Drystan. The tale introduces us to a character called Linden, who we have not met before; Linden was in charge of the clowns before Drystan & this short stories basically tells us how Drystan came to replace Linden.

Despite its short length, The Snake Charm includes plenty of tension & evokes a fair amount of emotion as well. We learn a little more about a couple of other characters from the main series, not just Drystan; & for me these little tidbits just helped to reinforce the opinions of characters I already had. The Snake Charm definitely has the same feel as the Micah Grey books & pulls you into the world of R. H. Ragona’s Circus very well. My only criticism is that I wish it had been longer, it reminded me of my love for Drystan & left me missing the characters of the main series.

I really enjoyed this little story as it makes me ridiculously happy to know that mermaids exist/ed in this world! I loved the mermaid’s character & the uncertainty of what was going to happen. This little tail forced me to feel pity for the fisherman and the mermaid, and also the fisherman’s wife. It was short, but if it had been much longer it would have lost some of it’s charm. 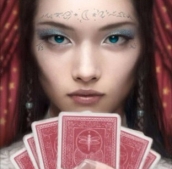 The Tarot Reader provides fans of Laura Lam’s Cyan a huge insight into Cyan’s life before she’s brought into the Micah Grey books; over 78 pages readers are able to meet & learn more about Cyan’s parents, Riley & Batheo’s Circus of Curiosities, Cyan’s abilities, her love for Oliver, & there’s a few snippets about Cyan’s home country, Temne, too. The little tale is full of new information & has answered almost every question I’ve had about Cyan & her past.

Cyan is my favourite character in the Micah Grey books; I adored the mystery that constantly surrounded her, her honest & kind personality & I desperately wanted to know more about her. Although this short story was only 78 pages it felt much longer as quite a lot happened, & I feel so satisfied & happy about what I learnt from this short tale.

It was really nice to meet Cyan’s parents, & to learn about her relationship with them… it was also really cool to experience a bit of Riley & Batheo’s Circus of Curiosities & how Cyan told fortunes before her abilities fully developed. The scene in which Cyan’s abilities first start to truly develop came as a very big surprise & was incredibly tense – it was also interesting to see what Cyan knew before her adventure with Micah & Drystan started & I think it’ll change how I read the books on my next reread! I’m also super happy that we got to experience a bit of Cyan & Oli’s relationship; knowing how they met & a bit more of their story makes me super happy.

There was also a scene that included asking for consent before a kiss happened & that was 10/10 fabulous.

When I finished the story I wanted to reread it immediately & I’m sure I’ll read it a few more times! Part of me really wishes it had been longer, & Laura knows how much I would love a full book about Cyan, but this story has made me very happy & has made me love Cyan even more than before. I gave this five stars on GoodReads but it deserves all of the stars in the universe.

The Card Sharp: 🃏
The Card Sharp throws readers back in time to when Drystan Hornbeam was a drug addict that worked for one of the biggest gangsters in Ellada, revealing details about his life before the circus, that we’ve only had small snippets of during the main series.

This short story tells fans of the Micah Grey books all about how Drystan got into dealing drugs, his personal battle against his own addition, his first affair with a man & how he learnt to do basic magic tricks, at the poker table, & away from it.

I really enjoyed this quick read as Laura has revealed some great details about more than one of the main characters in the original series, as well as some details about the poorer & rougher corners of Ellada. Anyone who is a fan of Drystan will absolutely love this read.

The Mechanical Minotaur: 🐃
The Mechanical Minotaur is a quick read about a mother’s choice between her son’s safety & her work. As readers we are introduced to a few new characters that aren’t in the main series, but also hear a few details about a character that is. Additionally, readers get to find out a little bit more about how magical the Vestige artefacts really are & what they are capable of doing.

The Vestigial Tales were fun to read & gave me a little dose of a series that I absolutely adore, they’re great for anyone who has either read & loved the series & wants a little more, or for someone that wants to test the waters before diving into the full series (although readers will experience some key spoilers if they choose to read the mini series before the main series!)

It’s probably pretty obvious but The Tarot reader was my favourite story in this mini series, & I’m overjoyed that it was the longest one too. I would still absolutely love to have a book all about Cyan but The Tarot Reader gave me that little bit extra that I wanted so desperately! I’m super grateful that Laura asked me to review her novellas for The Micah Grey books. I hope that one day the full set of The Vestigial Tales will be put together in a physical book & I’d also love it if Laura had someone make up Cyan’s tarot deck for her readers to purchase!

If you want to buy any of The Vestigial Tales you can do so here:

If you’d like to read the main series, you can find them here:

You can find the author Laura Lam on Twitter too!

2 thoughts on “The Vestigial Tales by Laura Lam”